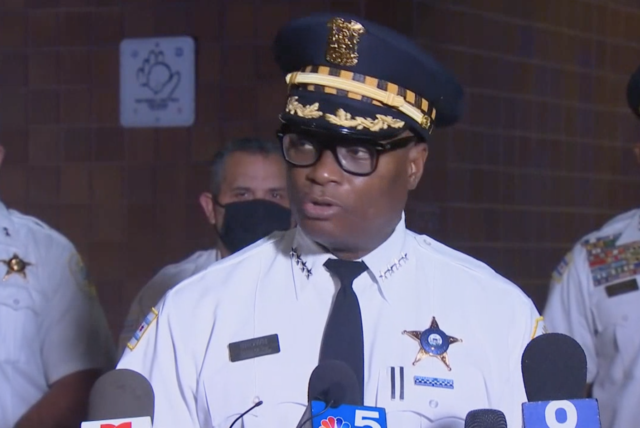 CHICAGO — Chicago police say 17 officers were injured and at least 24 people were arrested after large demonstrations in the city’s downtown were overtaken by violence as officers were beaten with items like skateboards and pepper spray was deployed.

Chicago Police Supt. David Brown said the day started with peaceful protests on the city’s South Side with no reports of arrests or violence as the group traveled for five miles into the downtown area, NBC 5 reported.

“It wasn’t until later this afternoon during a separate protest downtown where multiple agitators hijacked this peaceful protest,” Brown said.

He noted that people in the crowd used black umbrellas to shield themselves as they changed their appearance before “assaulting officers.”

Seventeen officers were treated for a variety of injuries, after protesters sprayed them with mace and beat them with items including a skateboard, Brown said. Consequently, two protesters were also treated for injuries at the scene. It was unknown if they were among those arrested.

“An officer was just beat in the head with a skateboard repeatedly and it’s clear that that was the intent of the agitators,” Brown said, adding that video of the incident was expected to be released Sunday, reported NBC Chicago.

The clashes sparked after a group calling for the defunding of police. Violence erupted at Michigan Avenue and Wacker Drive, where multiple incidents were reported.

According to footage from the scene, several protesters could be seen scuffling with police blocking streets and pepper spray was used on parts of the crowd.

The group then continued to Michigan Avenue and Randolph Street, heading toward Chicago’s Loop as city bridges remained lifted, preventing them from crossing the Chicago River.

The group chanted things like “no justice, no peace” as they called for defunding the police and abolishing U.S. Immigrations and Customs Enforcement. Among their demands were the removal of police officers from Chicago Public Schools.