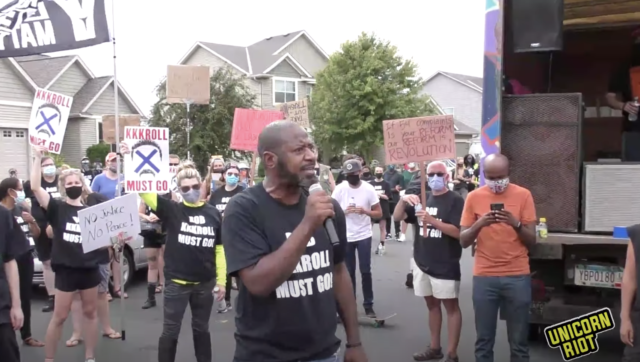 Until recently, it was very easy to debunk the idea that Black Lives Matter is a politically mainstream organization focused exclusively on the fight for racial justice. All you had to do was point in the direction of BLM’s official website, which had a tab right at the top called “What We Believe” leading to a section of the site that outlined, well, what they believe. And by their own admission, they believed, and were fighting for, many things that the vast majority of human beings on Earth, whatever their race, would find bizarre or objectionable. But sometime in the past few days, the “What We Believe” page at BlackLivesMatter.com was unceremoniously scrubbed, with no explanation offered publicly, according to Matt Walsh of the Daily Wire.

If you spend a little more time searching on the site now, there are still ominous signs that this is a radical organization. In fact, you don’t have to search that hard at all. The “Herstory” section tells us about the “three radical black organizers” who founded BLM. Actually, they’re all professed Marxists, though that fact is not shared. It also claims that black people are being “systematically and intentionally targeted for demise,” which is patently untrue and completely absurd. There is a one-paragraph detour into LGBT issues but most of the rest of the content in this section and on the rest of the site is relatively sanitary and inoffensive, though there is no shortage of false narratives being peddled.

BLM’s “About” section tells us this about the group’s beliefs and goals:

We are expansive. We are a collective of liberators who believe in an inclusive and spacious movement. We also believe that in order to win and bring as many people with us along the way, we must move beyond the narrow nationalism that is all too prevalent in Black communities. We must ensure we are building a movement that brings all of us to the front.

We affirm the lives of Black queer and trans folks, disabled folks, undocumented folks, folks with records, women, and all Black lives along the gender spectrum. Our network centers those who have been marginalized within Black liberation movements.

We are working for a world where Black lives are no longer systematically targeted for demise.

We affirm our humanity, our contributions to this society, and our resilience in the face of deadly oppression.

But this is a very selective abridgment of what the “What We Believe” page used to say. Unfortunately for BLM, though, everything lives forever on the internet. A visit to the cached version of the deleted section allows us to compare what they want us to know about their goals today against what they used to say about themselves. Here are the beliefs BLM used to announce proudly, before the memory-holing process began (emphasis via Matt Walsh):

We are guided by the fact that all Black lives matter, regardless of actual or perceived sexual identity, gender identity, gender expression, economic status, ability, disability, religious beliefs or disbeliefs, immigration status, or location.

We make space for transgender brothers and sisters to participate and lead.

We are self-reflexive and do the work required to dismantle cisgender privilege and uplift Black trans folk, especially Black trans women who continue to be disproportionately impacted by trans-antagonistic violence.

We build a space that affirms Black women and is free from sexism, misogyny, and environments in which men are centered.

We practice empathy. We engage comrades with the intent to learn about and connect with their contexts.

We make our spaces family-friendly and enable parents to fully participate with their children. We dismantle the patriarchal practice that requires mothers to work “double shifts” so that they can mother in private even as they participate in public justice work.

We disrupt the Western-prescribed nuclear family structure requirement by supporting each other as extended families and “villages” that collectively care for one another, especially our children, to the degree that mothers, parents, and children are comfortable.

We foster a queer‐affirming network. When we gather, we do so with the intention of freeing ourselves from the tight grip of heteronormative thinking, or rather, the belief that all in the world are heterosexual (unless s/he or they disclose otherwise).

The most notable goal that BLM no longer wants to advertise is the disruption of “the western-prescribed nuclear family structure.” To call such a belief “far left” would be a vast understatement. With its direct opposition to the nuclear family, BLM had positioned itself on the fringes of the fringes of the fringe. And considering that it is precisely the “disruption” of the nuclear family in the black community that has contributed so heavily to the socioeconomic problems that plague it, BLM’s affirmation and promotion of this self-destructive trend is especially grotesque and dangerous, Walsh reported via Daily Wire.

There are other notable changes, too. Even the word “comrades” — which brings communism to mind, as it was intended to — has been removed. And notice the intense, nearly single-minded, focus on the problems of “heteronormative thinking,” “cisgender privilege,” and the alleged oppression of LGBT people, with a special emphasis on the T. What does any of this have to do with racial justice? Does the average black American care about “heteronormative thinking,” or even know what the phrase means? Probably not, and the same goes for the average white American or the average American of any other race. These are the buzzwords and priorities of blue-haired gender studies majors, not normal working class families.

Would all of the people wearing Black Lives Matter t-shirts still be wearing them if they understood what cause they were really representing? asks Walsh. It seems that BLM itself was worried that the answer to that question is “no.” And now they have gotten rid of most of the content that hinted at the truth: that BLM is, more than anything, a militant Marxist organization that cares most about LGBT issues but uses racial justice as a cover.

Law Officer appreciates the unmasking reported by Daily Wire. We have also been actively engaged in pulling the curtain back on the BLM movement with articles exposing their hypocrisy:

Furthermore, we believe the BLM movement is getting nervous since influential people in the Black community like Herschel Walker, Jason Whitlock, and Marcellus Wiley, among others have also shined a light on their destructive beliefs:

So just because the BLM movement has put up a new facade doesn’t mean their core beliefs have changed. They have not.

As the BLM movement has demonized police, advocated violence, and lionized criminals who’ve failed to comply with of law enforcement, Whitlock addressed the propaganda being touted by professional sports figures. He wrote, “Jacob Blake, George Floyd, Eric Garner and Rayshard Brooks are not examples of ‘systemic racism.’ If anything, they’re examples of ‘systemic resisting arrest.’”