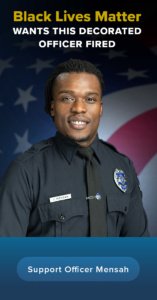 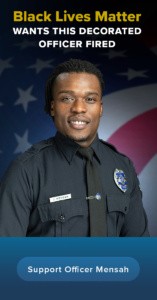 Attorney Kimberly Motley told news channel CBS 58 that she is not looking to “drag the names of all police through the mud” and that this is all about Officer Joseph Mensah. And that very much seems to be the case.

For example, several other (white) officers with the department also faced imminent danger and shot at armed suspects in the last five years. However, Motley has failed to address them on several occasions. For whatever reason, she seems laser-focused on targeting Officer Mensah.

Noticeably, her complaint involves incidents that occurred years ago—two shooting involving Officer Mensah that were investigated by multiple agencies and determined to be justified without any misconduct. The third investigation has yet to be completed, so it’s a wonder how anyone could claim to know the facts of the matter.

Nevertheless, Motley seemed incredulous about the outpouring of support for Officer Mensah. Indeed, it seems citizens of Wauwatosa—who aren’t so easily fooled—eagerly donated to help Officer Mensah pay for his rising legal costs against all the libel and slander defamation he has endured.

Motley told CBS 58, “It’s really telling that there are so many people that have chosen to give to this GoFundMe as though Joseph Mensah is some type of martyr,” Motley said. “Living martyr… when you have three males of color who are gone.”

Ironically, Motley has yet to recognize her own accountability in stirring up the chaos in Wauwatosa and precipitating the defamation that Officer Mensah continues to face.

The fact that Motley cannot believe that the community would stand up for (black) Officer Mensah after he was suspended by (white) city officials, seems puzzling. And like the swelling ranks of Officer Mensah’s supporters, we’re also confused about her name calling.

However, we must admit that we agree. Officer Mensah is a martyr: he is a black officer who has been suspended—after a white city official, Alderperson Heather Kuhl—demanded that an all-white commission fire him to inexplicably help the city “repair the damage” of its “racist history,” as she publicly claimed.

Isn’t this exactly the kind of prejudice—and “systematic racism”—that people have been protesting about?

Needless to say, we’re quite confused by the comments that Motley and Kuhl have made—and how they seem to avoid acknowledging that Officer Mensah is actually an “officer of color.”

We can debate whether or not Officer Mensah is a “living martyr.” However, in criticizing his supporters, Motley makes it quite clear that somehow, only some black lives matter.

Indeed, the support for Officer Mensah is “really telling.”

It speaks volumes about how people actually care about where they live—and they support law enforcement officers who protect them.

And whatever Motley actually meant by “really telling,” the continued outpouring of support for Officer Mensah truly says it all.