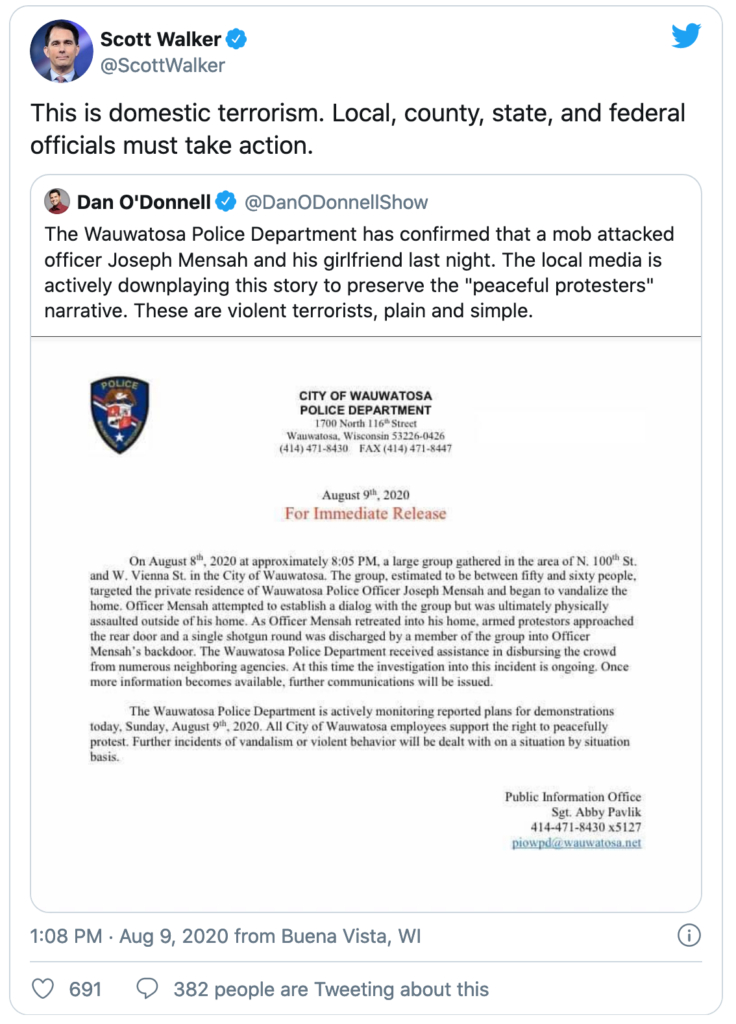 On Saturday August 8, around 8pm, about 60 Black Lives Matter protesters attacked (black) Officer Joseph Mensah at his girlfriend’s residence in Wauwatosa, Wisconsin just outside of Milwaukee.

Officer Mensah and his girlfriend were assaulted and attacked by BLM protesters, who went to the residence to vandalize it, as a local BLM leader. However, one of the protesters was armed with a shotgun.

Yes, Black Lives Matter protesters went to the home of a black officer and vandalized it.

Unfortunately, the hypocrisy doesn’t end there.

According a BLM leader, while “peacefully” vandalizing the residence, a shotgun that one of the “peaceful” protesters was carrying somehow fired. The only resemblance of truth is that the shotgun blast barely missed Officer Mensah.

Vaun Mayes, a prominent leader of the Milwaukee Black Lives Matter movement said “protesters went to Mensah’s house to toilet paper and put crime scene tape up. But Mensah came outside,” according to a Wisconsin Public Radio (WPR) article. Accordingly, it seems people should wait inside their residences until BLM protesters are done vandalizing it, so as not to disturb the peacefulness of their childish, vandalism. For the record, BLM leaders should note that Halloween usually takes place on the last day of October.

But if you’re seriously trying to make sense of the logic of Black Live Matter leadership, in this case it may help to know that Mayes was recently released from jail, and still faces federal charges in a separate case related to a plot to firebomb a Milwaukee police station in 2016, according to a CBS 58 news report.

And it may also help to know that Mayes was later charged with intimidating witnesses involved in the firebomb case, as reported in the Milwaukee Journal Sentinel. 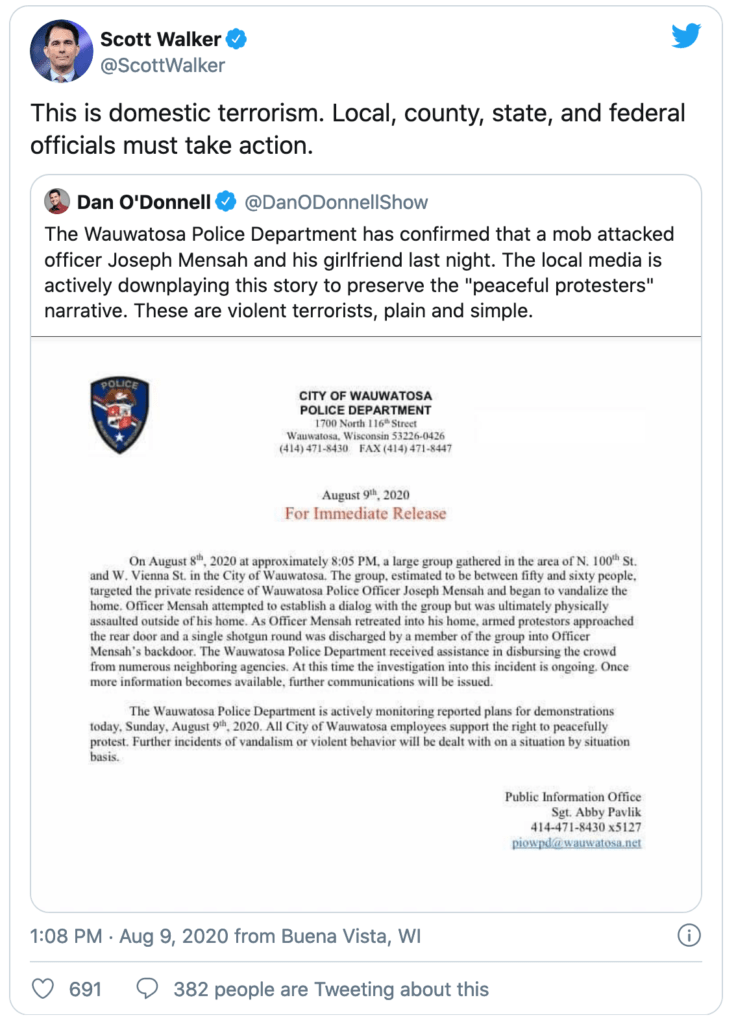 Mayes wasn’t the only so-called “leader” involved in the protests against Officer Mensah.

State Representative David Bowen wrote in a press release on State Assembly letterhead, that he was among the “passionate people” who were “peacefully” protesting outside the residence where Officer Mensah was.

And again, even though at least one “peaceful” protester was carrying a shotgun, Representative Bowen wrote that “It was Joseph Mensah that decided to pull the trigger on somebody else’s firearm.”

Representative Bowen previously spoke at a protest against Officer Mensah on June 4. Coincidentally, Vaun Mayes, the Milwaukee Black Lives Matter activist facing federal charges regarding the firebombing of a police station also spoke during the protest.

And in what appears to be a similar attempt to shift the blame away from BLM protesters, Mayes told Heavy.com that Mensah is “taking advantage of the moment.” Mayes also said that “Mensah grabbed at one of the protesters weapons on a sling and the gun fired.” Further, Mayes expressed his disagreement with the way that Officer Mensah and his girlfriend are claiming to be “total victims.”

Even more unbelievably, the attack comes a few weeks after Wauwatosa Alderperson Heather Kuhl, demanded that Officer Mensah be fired to help “repair the damage” of Wauwatosa’s “racist history.” Mensah was suspended the next day.

Yes you read that right, a white city official demanded the firing of a black officer to somehow fix the city’s “racist history.”

Isn’t this the kind of “systematic” racism that everyone claims to be protesting about?

It’s Time to Stop the Hypocrisy

Just so we are clear…

Are citizens of Wauwatosa and the rest of America supposed to believe that Black Lives Matter protesters hypocritically demanding that a black officer be fired just “peacefully” surrounded and vandalized the officer’s residence—and that the black police officer took “advantage of the moment” to use some “peaceful” unidentified person’s safely slung shotgun to shoot himself so he could claim to be a “victim”?

We believe the criminal investigation—and the evidence in the ensuing criminal trial(s)—will likely prove otherwise.

Defend The Heroes is a non-profit organization that helps defend law enforcement professionals and agencies from defamation and the outrageous demands of so-called “social justice.” Law Officer is a proud partner of Defend The Heroes.

Defend The Heroes is a non-profit organization that exists to help defend law enforcement professionals and agencies from defamation, and the demands of so-called social “justice.” Law Officer is a proud partner of this important organization.  Find out how you can help at: www.defendheroes.org