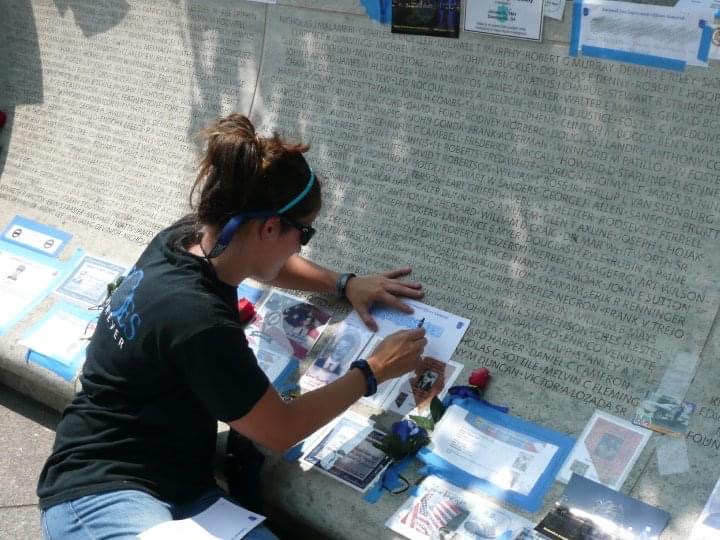 Katie Dahomey, the daughter of fallen Gainesville (FL) Lt. Corey Dahlem has been flying a Blue Line Flag year around to honor her late father. Lieutenant Dahlem was struck and killed by a drunk driver in 2007, when Katie was just 13 years old.

Earlier this week, she got a stark and disturbing reminder of what hate looks like….and it came from an anonymous neighbor that left a letter at her home titled “Black Lives Matter.”

Leaving a note at Katie’s house, the cowardly Black Lives Matter supporter said that the …”decision to fly a Blue Lives Matter flag is directly harmful to the black community.” Saying that Blue Lives Matter was created as a response to Black Lives Matter, the letter advised Katie that she was “insensitive” and that “it conveys the message that you do not care about the innocent black lives that have died at the hands of police brutality.”

In an exclusive interview with Law Officer, Katie says that she has flown the flag for years and no one has ever had an issue with it. In fact, she says that she often receives praise from neighbors for doing so.

“I fly the flag to show respect to fallen officers and to honor police officers killed in the line of duty. But specifically, I fly this flag for Officer Scott Baird and most importantly for my dad Lt. Corey Dahlem,” Katie said.

Katie tells us that “this flag means so much to me. It is something that represents fallen officers. I lost my Father 13 years ago and immediately had my life changed. To me having my flag up is a constant reminder of my dad’s life and how much he meant to me and my community. This flag is a reminder of my friends’ parents who were killed in the line of duty.  To me this flag supports police officers who have courage and are putting their badge on every night leaving their family and going into work. To me, this flag represents all of the Police officers who have supported me throughout these difficult years. I could not be more proud to fly my flag in honor of my Dad Lt. Corey Dahlem.” 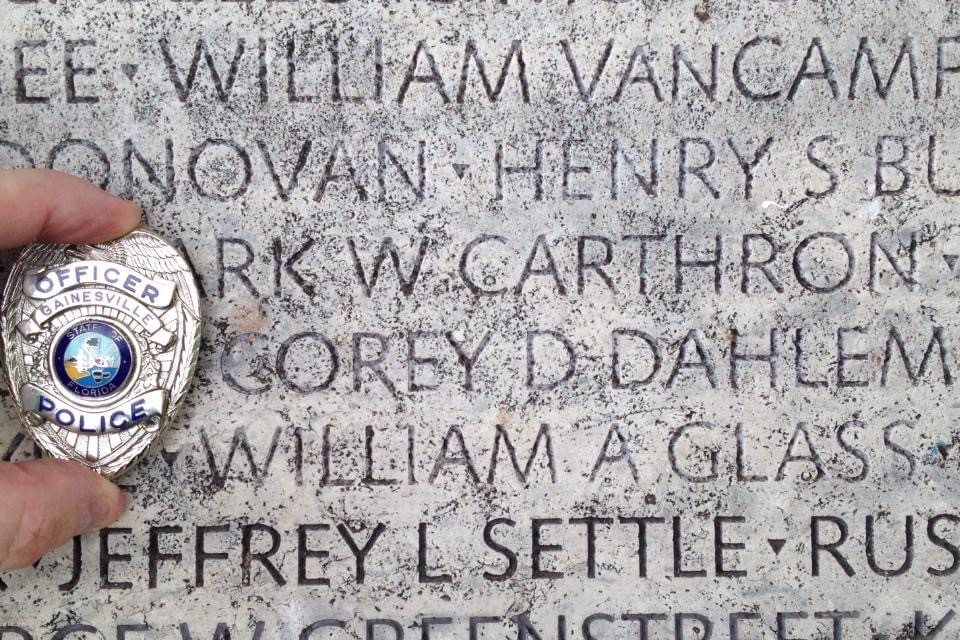 The letter titled, BLACK LIVES MATTER, was not only full of innuendos and lies but ironically made the assumption that Katie did not care about black lives. Nothing says hypocrisy more than a movement that wants to end discrimination that does so itself.

Katie tells us that it is “insensitive” to make the assumption that she has disrespect for any group and that if the anonymous neighbor would have simply spoken to her, she could have explained the very reason that she displays the flag.

“To me saying there is no such thing as a blue life infuriates me. There is a complete Blue family and I am very proud to be a part of it. I have hundreds of officers local and across the states who support me and other Police Survivors. I think this person put a lot of assumptions of what they think the flag means onto me. Everything in their letter, whether it is true or not, has nothing to do with a Thin Blue Line Flag itself,” Katie states.

The letter was so outrageous, we felt there was a need to address much of it specifically: 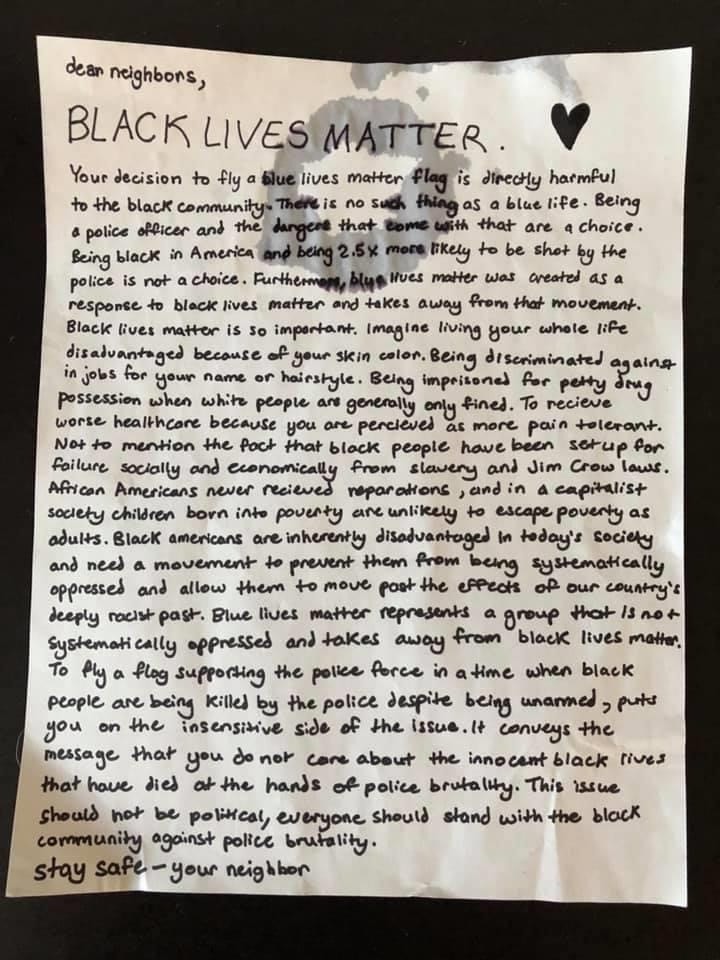 “Your decision to fly a Blue Lives Matter flag is directly harmful to the black community.”

And we would ask, who made that rule? How does a flag that has represented fallen officers for almost three decades have anything to do with the black community? That assumption is simply that, an assumption and we would imagine that anyone that supposedly supports Black Lives Matter would not want anyone to make assumptions. Congratulations, you are an hypocrite.

You may want to look up the history of Blue Lives Matter and stop reading memes and hashtags. The movement was formed on December 20, 2014, in the wake of the murders of NYPD officers Rafael Ramos and Wenjian Liu. This is long before the hashtag Black Lives Matter formed with the ideology to break up the nuclear family and to abolish law enforcement. Then again, this is a blue line flag and it has been around for decades. Your ignorance is apparent.

“Being Black in America and being 2.5 times more likely to be shot by police is not a choice.”

This is an actual lie. It is a choice to commit crimes and it is a choice to attack cops. And for the 2.5 times part, you may want to take a look at who actually commits crimes in America rather than the silly comparison of the police to the United States Census. Law Enforcement does not choose who commits crimes and who victimizes others. It is criminals that should be compared to law enforcement contacts and use of force and not the general population. Are we supposed to gather from this letter that crime and victimization of citizens are actually happening right along with the racial demographic percentages of the U.S. Census? That may happen in a made believe world but unfortunately, law enforcement works in reality.

“Not to mention the fact that black people have been set up for failure socially and economically from slavery and Jim Crow Laws.”

We aren’t sure what this has to do with the flying of a flag to honor fallen police officers but your argument here lies with the Democratic Party.  Once again, read your history.

“Black Americans are inherently disadvantaged in today’s society and need a movement to prevent them from being systematically oppressed and allow them to move past the effects of our country’s deeply racist past.”

Yes, America has a racist past and it is horrible. But what may be equally horrible is that you actually believe that the tactics of Black Lives Matter to destroy our cities and burn down businesses, including minority businesses will actually help that?

“To fly a flag supporting the police force in a time when black people are being killed by the police despite being unarmed, puts you on the insensitive side of the issue. It conveys the message that you do not care about the innocent black lives that have died at the hands of police brutality.”

You certainly have an issue with the facts and you are certainly insensitive to the group that is shot “unarmed” by the police at a higher rate than blacks. That would be whites. In fact, since 2015, out of all the suspects shot and killed by law enforcement, by percentage of those shot, 3% of those unarmed were white and 2% were black. So it appears you are insensitive and you are clearly wrong.

“This issue should not be political, everyone should stand with the black community against police brutality.”

It was you that made it political, not Katie and once again, how does a flag that represents fallen officers have anything to do with not being for blacks or against police brutality?

Katie doesn’t take this as a threat, but we do and for that, we consider you evil.

Katie tells us that she will continue to fly the flag to honor her father and we are proud of her for that. This cowardly letter was left for no other reason than to intimidate her and just like us, Katie will not be bullied.
Katie Dahomey has flown the flag for years to honor her late father and she tells is that she doesn’t have any hate towards anyone. She has spent her entire life helping others. From her work as a nurse to serving the homeless to building homes for those in need including spending weeks in Haiti volunteering, she can hold her head high and be proud.
Her dad certainly is.