As riots and protests have continued to unfold around the country following the custodial death of George Floyd, the Black Lives Matter movement has taken center stage.

Yet as their popularity grows, I’ve continued to wonder; How did three Marxist-inspired women who began the BLM movement dupe the entire country?

BLM has become many things to different people. Spirited debates occur between police officers within the same ranks as well as family members and social networks involving cops and the community. Nevertheless, one thing is relatively certain, if you take a public position contrary to the movement, you’ll likely be branded a racist.

While pockets of injustice should always be addressed and remedied, have you also wondered how a movement created by radicals spreading disinformation and outright lies have duped an entire country?  Moreover, how did it become an enormously powerful entity with political clout that is able to clobber anyone who dares to speak truth regarding its’ origin and their ultimate objectives?

Before continuing, I’d like to recommend Dr. Ron Martinelli’s best seller, The Truth Behind the Black Lives Matter Movement. You might remember that I recently mentioned this resource after Amazon and other book distributors pulled it from their shelves. That is what people are doing in 2020 when truth strikes a nerve with woke-thinking individuals; cancel it, erase it, pretend it doesn’t exist, or shout it down as racist.

Martinelli’s book is fantastic. It is a deep dive into well sourced truth as it relates to the BLM movement and the power they wield today.

The Truth Behind the Black Lives Matter Movement explores the birth of the crusade, the radical background of its co-founders, Alicia Garza, Patrisse Cullors, and Opal Tometi, their frightening agenda, and the outright lies that were perpetuated as truth to give them momentum going forward. Furthermore, it investigates their sources of funding and highlights one of its fundamental partners; the media. 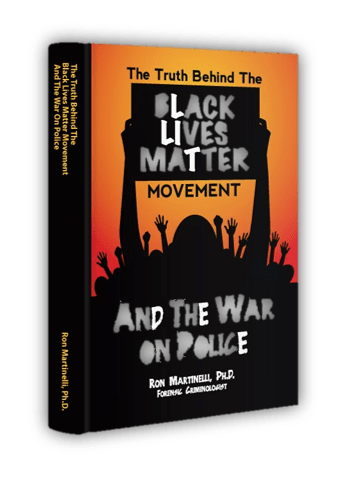 When reading Martinelli’s book in 2020 – it was written in 2016 – I’m giving him credit for being prophetic. No, not of biblical proportions, but we are currently living through predictions he made several years ago; it’s eerily chilling to think BLM was that predictable to a man who spent so much time researching, studying, and analyzing the movement.

The Truth Behind the Black Lives Matter is “just the facts, ma’am” (ala Sgt. Joe Friday for those old enough to remember). It is not political commentary, but straightforward, well-sourced facts. That is why no one can successfully call him out on his work, although Amazon and others can try to “cancel” it.

Frighteningly, the BLM movement has invaded many law enforcement agencies. For instance, San Francisco Police Department is hanging BLM posters while they ban officers wearing Thin Blue Line masks. And they are not alone! The radical movement has not simply been legitimized, it’s been weaponized against people and institutions who do not yield to their sword. If you think that is an inflammatory statement, then you’ve not been listening to their speeches. Violent acts are part of the playbook.

Is your head spinning?

While the leaders of these police organizations might be well-intentioned, they are lambs being led to slaughter. Make no mistake, the BLM co-founders “follow the philosophies, ideologies, goals and objectives of militant, radical and violent anti-police, anti-government, Black Nationalist, Afrikaner, Marxist groups and political organizations,” according to Martinelli.[1]

Furthermore, the goals and objectives of the BLM movement includes “the disarming, disassembly, and defunding of law enforcement; the diminishing of local, State and the Federal government; and the eventual diminishing of our nation’s democratic rule of law. Obviously, such measures would result in complete anarchy,” Martinelli wrote in 2016.[2]

The custodial death of George Floyd is simply a vehicle to help them achieve these goals. “Justice for George” is a smokescreen. Never before have we seen the “wheels of justice” move so rapidly during an in-custody death. It’s like a drag race to see who can lay the most rubber on cops, despite incompetent drivers careening the dragster into the stands full of fans.

Now, returning to my question; How did three Marxist-inspired women who began BLM dupe the entire country?

The answers are simple:

Where do we go from here?

I hate to intersect police work with politics, but the industry has been pulled into a vortex that seems inescapable. Consequently, elections have consequences. We are seeing the result of politicians – lavishly funded by the same sources as BLM – whose role has been to dismantle more than police departments, but the very concept of law and order; that is how the movement thrives.

The two national political parties could not be more different in their ambition. If lawlessness prevails, we are doomed. If the overall demise of law enforcement authority continues at its current pace, we will not recognize the business in a few short years. That seems to be the end game for many high profile Democrats.

Which path will we take?

Part of Martinelli’s summary in Chapter 5, titled, “Hijacked ideals and the breakdown of society,” is noteworthy.[3]

There are many good reasons why the law enforcement community should work with minority communities to enhance relationships and improve the quality of life for those residing in desperate communities.

Members of the law enforcement community can always learn more from minority communities. They want to demonstrate – and historically have demonstrated – their willingness and commitment to do so. Conversely, members of the minority community need to be equally trained in understanding the unique challenges and difficulties of policing in modern America. Education and building relationship bridges are mutually beneficial to each side.

At the same time, however, members of the black community need to be aware that radical, militant organizations such as Black Lives Matter movement are not the vehicle they want – or America needs – to move blacks forward to improving their future in American society.

Blacks need to keep in mind that the BLM movement is not a panacea for black respect and independence. Rather, it is a politically exploitive entity that if allowed to prosper, will severely polarize the races and damage relations with their law enforcement protectors. The BLM movement is not about “building” anything; it’s about tearing down and destroying.

One needs to be reminded that it was not the police who looted and burned down black owned businesses in Ferguson, MO and Baltimore, MD. It was members of the BLM movement and other black anarchists….

So the ultimate consideration is this: when you are in desperate need of help and your life hangs in the balance in the dead of night, whom would you rather call: members of the BLM movement – or the cops?

Leaders need be courageous and act in the best interests of society. Tribalism is destructive 100 percent of the time. When people groups are pitted against each other, it doesn’t end well. I am convinced that the influencing voices need to come from the black community. That is why I am encouraged to hear two high profile, black sports personalities, Jason Whitlock and Marcellus Wiley take on the agenda of Black Lives Matter.

It’s refreshing to hear a black icon and patriot like Herschel Walker speak out against the propaganda and violence being perpetuated in the U.S.

It is their collective voices that I hope and pray will convince black America there is a better way, and it’s not the radical Black Lives Matter movement. Indeed life has value; every life has value!