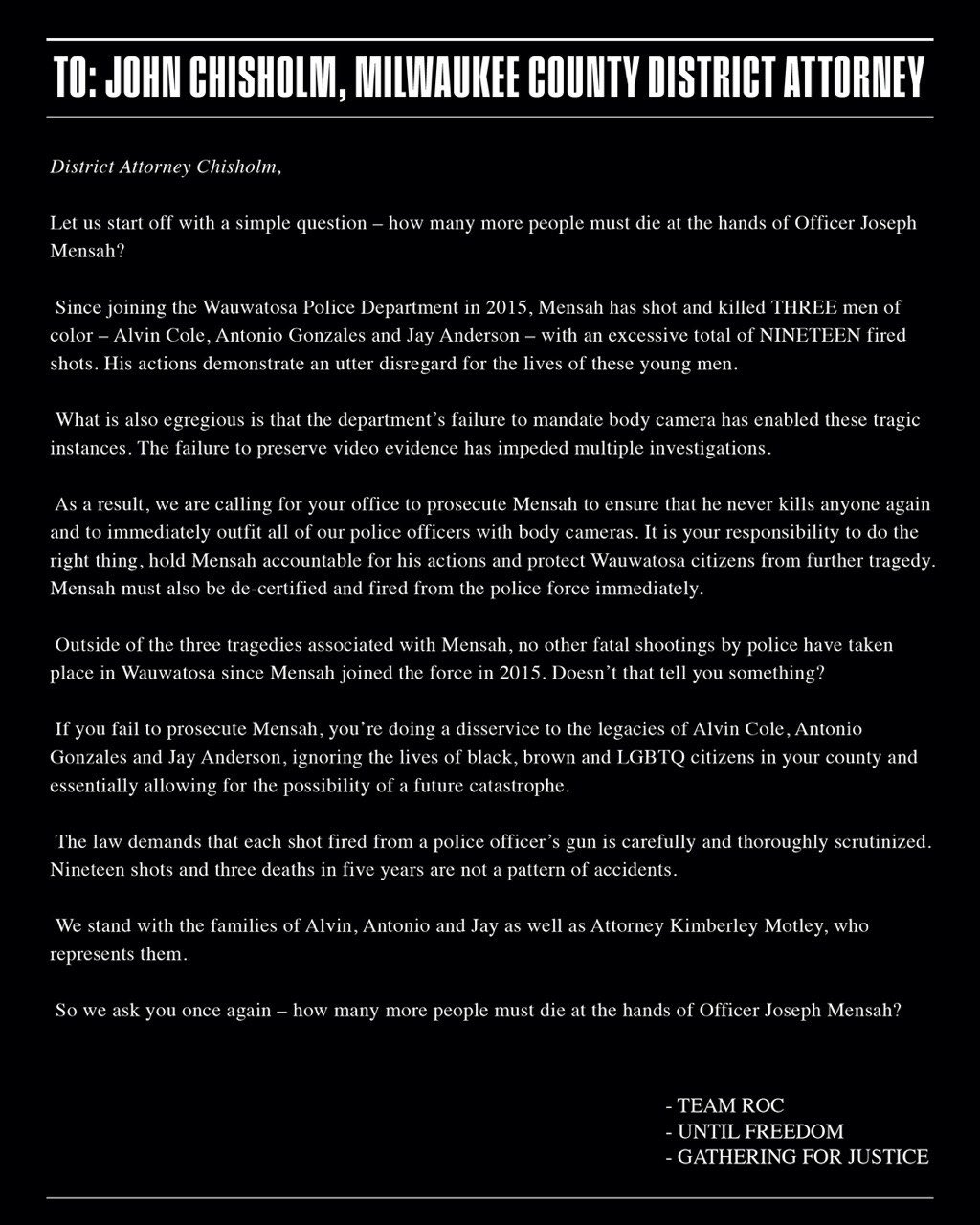 The social justice-focused division of Jay-Z’s Roc Nation company, Team Roc, continues to attack Wisconsin Officer Joseph Mensah after he has been investigated and cleared on past shootings dating back to 2015.

In one of the most hypocritical and potentially most racist actions we have seen, Social Justice Groups including Team Roc, Until Freedom, and Gathering for Justice have been demanding the termination and arrest of Mensah for defending his own life against suspects attacking him with a sword and guns over the last five years.

Mensah, who is black, has been suspended by local politicians for several weeks without a violation of policy even noted.

On August 10th, Defend The Heroes Inc., a non-profit that defends officers wrongly targeted by the media, sent an open letter to Team Roc and the Jonas Brothers for their attacks and they have yet to respond.

Oddly, last week, Team Roc who had previously purchased a full page ad in the Milwaukee Newspaper, tried to buy banner space in the area.

According to Complex, the Lamar Advertising Company reportedly declined to accept the billboard ad from Team ROC that included the statement “Officer Mensah must be held accountable.” Per Thursday’s letter, a Lamar rep said the billboard “could have an effect on a future action” and/or represented an “issue with criminal implications.”

The law firm representing Roc Nation said that Lamar Advertising Company’s actions “smack of improper censorship” and reiterated their stance that Mensah remains an “active, lethal threat” to his community.

The continued attacks on a black officer that defended his life against three violent suspects that were attacking him with weapons, doesn’t smack at “censorship” but certainly appears to smack at the fact that Team Roc does not believe that his black life matters.

And Lamar Advertising very likely sees this what it is. A lie against a good and decent law enforcement professional, that if it continues to be told will not only potentially create more violence against Mensah (he was recently shot at in a home) but could very likely cause civil action against anyone that continues to spout it for defamation and slander.

One thing that is clear in Wauwatosa, Wisconsin.

The lies by the politicians, activists and social justice groups have created a dangerous environment for Officer Mensah.

Earlier this month, protesters arrived at a home that he was at and individuals in the group fired a shotgun in his back door, barely missing Mensah.

Although State Representative David Bowen said that protesters were provoked by Mensah and the firing of the shotgun was Mensah’s fault, three suspects have now been arrested and Bowen has gone silent and obtained a lawyer.

Defend The Heroes is a non-profit organization that exists to help defend law enforcement professionals and agencies from defamation, and the demands of so-called social “justice.” Law Officer is a proud partner of this important organization.

Defend The Heroes is a non-profit organization that exists to help defend law enforcement professionals and agencies from defamation, and the demands of so-called social “justice.” Law Officer is a proud partner of this important organization.  Find out how you can help at: www.defendheroes.org