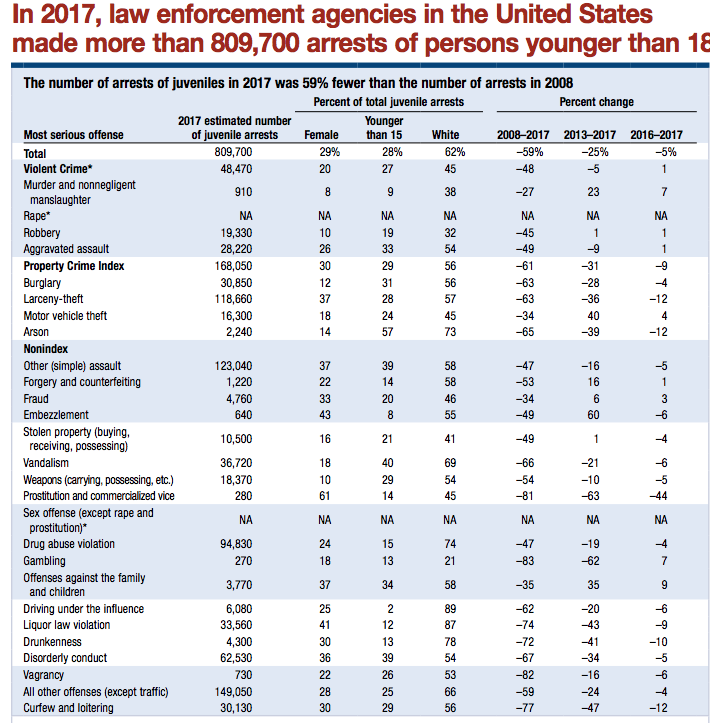 Arrests of adults and juveniles are down considerably. Why?

What impact does this have on growing violence in cities?

Is intense criticism of cops having an impact?

I’m asked by readers about “exploding” numbers of arrests. But arrests of juveniles and adults are down considerably, Arrests.

Per the Bureau of Justice Statistics of the US Department of Justice, violent crime is up 28 percent since 2015, Crime in The US.

However, per the FBI, reported violent crime is down slightly or flat which could impact arrests a bit.

Crime reporting is also a consideration with only 41 percent of violent crimes reported. It’s much less for property crimes per the Bureau of Justice Statistics.

Beyond crime and crime reporting, the question is whether law enforcement is being browbeaten into fewer arrests, or cops are refusing to be proactive because of intense criticism, or law enforcement sees few consequences for those arrested?

COVID will inevitably play a part in 2020.

Violence for 2020 in cities is up considerably. People and businesses are fleeing. Insurance companies are paying out record amounts for protests-riots. Fear of crime is at very high levels, Crime in The US.

If arrests from past years are a barometer for today, are the lack of arrests is contributing to today’s conditions?

Considering the intense criticism and scrutiny of cops, officers are sometimes reluctant to do anything that could land them on the front page of newspapers.

The Office Of Juvenile Justice And Delinquency Prevention (OJJDP) and the National Institute of Justice (NIJ) released “Juvenile Arrests, 2017.”

Overall, juvenile arrests have declined for more than a decade, but patterns vary by demographic group and offense.

The juvenile arrest rate for aggravated assault declined in the last 5 years, the robbery arrest rate stayed about the same, and the murder arrest rate increased annually since 2012.

Male and female juvenile arrest rates have declined in the last 10 years; however, the relative declines have been greater for males than for females across many offenses. As a result, the female share of juvenile arrests has grown since 1980.

US Arrests Decline By 25 Percent

Vera created a tool that analyzes arrest trends between 1980 and 2016. The data shows that overall arrests have declined by nearly 25 percent over the last decade.

The portion of U.S. residents age 16 or older who had experienced contact with the police in the preceding 12 months declined from 26 percent in 2011 to 21 percent in 2015, the Bureau of Justice Statistics announced.

The number of residents who had experienced contact with police dropped by more than 9 million people, from 62.9 million to 53.5 million during the period.

Among those who had contact with police, two percent experienced a nonfatal threat or use of force by police.

The Wall Street Journal offered, “Arrests for Low-Level Crimes Are Plummeting, and the Experts Are Flummoxed.”

There are time lags in the data which makes it difficult to examine today’s trends. Regardless, I believe that arrests are currently down for a variety of reasons, including protests, riots and COVID in 2020.

We are aware that cops are not being proactive in cities where police officers are being heavily criticized.

There is data indicating that police officers are making fewer arrests and public contacts.

There are cities where violence (especially homicides) is exploding.

Concurrently, there are surveys indicating that cops are reluctant to be proactive or aggressive as to stops. Data from the US Department of Justice indicates that proactive policing reduces crime, Police Strategies.

Violent crime increased by 28 percent since 2015 per the National Crime Survey. Documented increases also include Gallup (violence tripled) and additional sources, Crime in the US.

As I write this, the crisis of confidence within American law enforcement is considerable. But with increasing violence in a wide variety of cities, we may have more on our hands than protests and a reexamination of police-community relations.

The Crime in America.Net RSS feed (https://crimeinamerica.net/?feed=rss2) provides subscribers with a means to stay informed about the latest news, publications, and other announcements from the site.

My book based on thirty-five years of criminal justice public relations,” Success With The Media: Everything You Need To Survive Reporters and Your Organization” available at Amazon.