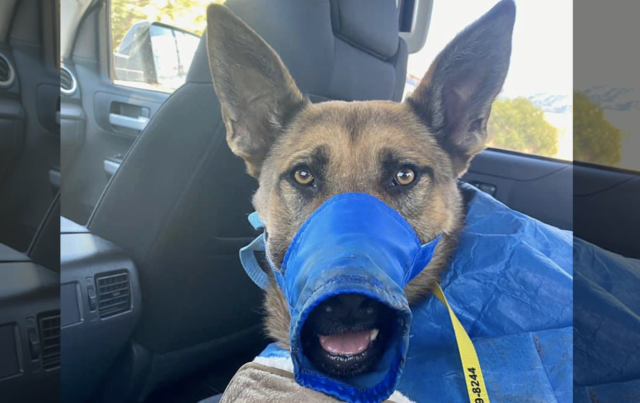 ROY, Utah – One man was shot and killed and another was taken into custody after an officer-involved shooting, according to officials with the Roy Police Department.

Police said an officer initiated a traffic stop around 2 a.m. Saturday for a traffic violation. The officer made contact and had a discussion with two occupants before they fled in the vehicle.

The officer briefly chased the vehicle before terminating the pursuit, KSL-TV reported.

However, a short time later police received reports that the vehicle had stopped in a large field near 2640 North and 1700 West in Clinton, near the city’s boundary with Roy.

“As officers approached the vehicle, they were subjected to gunfire from one of the subjects,” Roy police said. “Officers returned fire.”

Mik, who is a @RoyCityPD K9, was shot in his face but is expected to live. A Roy patrol car was also shot. The second man who was in that car is now in police custody. pic.twitter.com/m2eHtcTMaO

As a result of the shooting, officials said K9 Mik was struck in the face by gunfire and was being treated at an animal hospital emergency room on Saturday.

One Roy patrol vehicle was struck by gunfire on the driver’s side of the windshield, according to police.

A spokesman for Roy Police Department told KSL-TV that one suspect was killed and the other was taken into custody.

“The length (time/distance) of the pursuit, the number of officers who fired their weapons and an exact timeline of the incident are currently under investigation,” police said on Saturday. “The officers involved will be placed on administrative leave during this investigation.”

Police said the suspects were identified on Saturday, but their names and ages were not released at the time of report.

Per protocol, officials from the Weber and Davis county attorney’s offices were on scene and handling the investigation, according to police.

“It’s definitely something that’s always in the backs of our minds,” said Officer Joshua Taylor with the Roy Police Department. “It’s never something anybody ever wants to go through, but we here receive a lot of training, and I think that helps us.”

In the meantime, Law Officer is happy to report that K9 Mik is recovering from emergency surgery. The police department provided encouraging information on their Facebook page Sunday.

The following is a message from K9 Mik’s handler –

“Here are a couple pictures we were able to get of Mik coming home and relaxing.
He was expected to be in the hospital for a few more days, but was doing so well that they sent him home early. He is resting very comfortably and getting very spoiled”.

Here is a message from K9 Mik –

“Woof woof woof”
– Translation “I’m still in pain, but I am excited to get back to work and serve the people of Roy. Thank you to everyone for your support!”