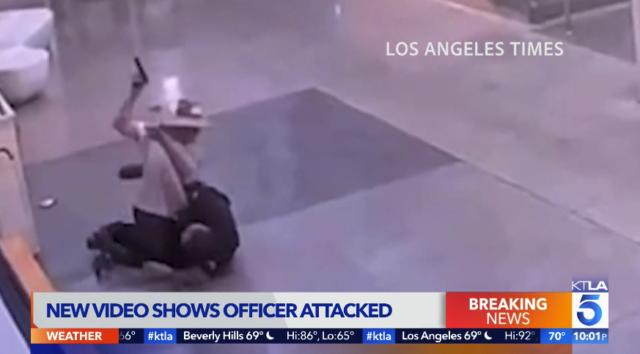 LOS ANGELES — The Los Angeles Police Department on Wednesday released graphic bodycam footage of what it identified as an attack on officers at a police station in the city last month.

Jose Guzman, 29, was seen entering the LAPD’s Harbor Division on Sept. 26 before attacking an officer, taking his department-issued Beretta, and pistol-whipping him multiple times, according to police and the bodycam footage. (Scroll down to watch video.)

Guzman fired a shot at another officer with the weapon before fleeing, police said.

The video was graphic and showed blood begin to pool next to the officer who was hit in the head with the weapon, identified as Anthony Freeman. At one point, Freeman, who was not shot, shouts for an ambulance and says, “I’m starting to black out!”

Freeman, a veteran of the department for more than 30 years, survived the attack. He had not yet returned to work as of Wednesday, the LAPD said.

Capt. Stacy Spell of the LAPD said the attack occurred around 10 p.m. The suspect was captured entering the station wearing a wide-brimmed hat and sunglasses before he allegedly put up his fists, got the officer to the ground, and wrestled his gun away. He then allegedly beat the officer with the gun several times and walked out of the station, Fox News reported.

The suspect took off in a white pickup truck and was later arrested, police said.

“Guzman sustained minor abrasions, was medically treated and was released for booking,” according to authorities.

Freeman was taken to an area hospital and was later released. His firearm was recovered from the suspect’s vehicle, police said.

The footage was released Wednesday, a day after the LAPD said it planned to investigate how one segment of the video was leaked to reporters just hours after the incident, according to KNBC.

Last week, LAPD Chief Michel Moore said the attack occurred amid an increasing number of assaults on police officers in the city.

“We’ve seen a 156% increase this year to date. That’s 282 felonious assaults versus 110, during the same period last year,” he told the station.

Guzman was charged on Sept. 29 with two counts of attempted murder of a peace officer, two counts of assault with a semiautomatic firearm, and one count each of robbery, evading and resisting an officer, police said.