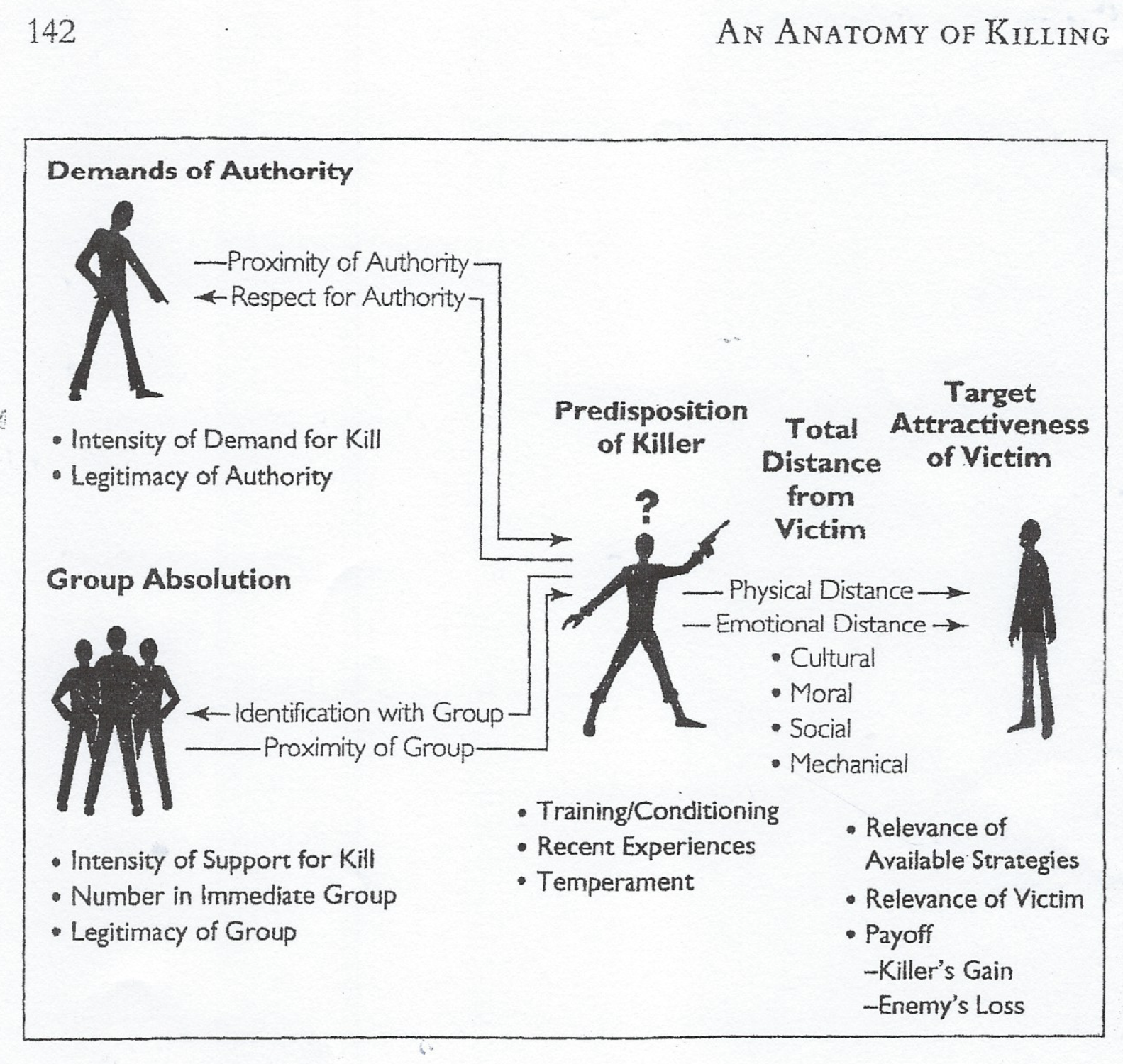 This article was originally published here. We are grateful to Lt. Col. Dave Grossman for letting us distribute it to our audience.

Masks give a powerful sense of anonymity to the killer, and dehumanize the victim. Thus preventing empathy, and empowering aggression, violence, and murder.  In city after city, across America, there have been more murders so far this year, than all of last year.  And masks are one of the major reasons why this is happening.

I wrote the book On Killing: The Psychological Cost of Learning to Kill in War and Society.  With over half-a-million copies sold, in seven languages, On Killing is a “perennial bestseller” and Google Scholar says it has been cited over 2,900 times in academic research.  It is truly one of the major scholarly works of our time.

People often point to some horrible crime and declare that, “This proves humans are naturally killers!”

My response to them is, “No.  That is an outlier.  Literally, one-in-a-million.  You explain to me the 99.9% of our citizens who will go a lifetime, and never even seriously attempt to take a human life. Explain that!”

Poverty, divorce, infidelity, layoffs, and traffic accidents occur by the millions every day in our society. And yet, in a lifetime of provocation, less than 00.1% of our citizens will attempt to take a human life. That is the hard thing to explain!

America is roughly a third-of-a-billion people. Every person who interacts with another person represents a friction point, adding up to billions of friction points every single day. An amazing array of social, physical, psychological and physiological factors provide a “lubricant” for each of these friction points, in order to prevent physical violence and murder.

Masks are like a handful of sand in an automobile engine, greatly increasing the “friction” at… Every. Single. One. Of these countless billions of daily contact points.

We all understand that people will say things online that they would never say face-to-face. And masks create a similar sense of anonymity for the aggressor, empowering face-to-face violence and hostility across our nation.

Israeli research tells us that if you are kidnapped, and you are blindfolded or you have a hood over your head, you are far more likely to be murdered by your captors. You would think, since I cannot identify my captors, then I am less of a threat to them. But your potential long-term threat to your captors is not what is keeping you alive. It is looking into the face of another human being — thus creating a powerful biological sense of empathy — which is the most important factor keeping that captive alive.

The face is the window to the soul, and covering the face with a mask destroys empathy and empowers interpersonal aggression.

That is why individuals being executed by hanging or firing squad, are traditionally blindfolded or hooded.  Mass murders committed by criminals, terrorists, or totalitarian states, very often involve shooting victims in the back of the head, or cutting their heads off from behind. Once again, covering or hiding the face negates empathy, and empowers some of the most ghastly forms of mass murder.

Masks also muffle your voice. So, many people shout in order to be heard and understood while wearing a mask. But shouting signals aggression! When someone shouts at you, you immediately become defensive and hostile.  And the situation can spiral downward from there, into aggressive confrontations, violence, and even murder

At a basic, intuitive, almost “biological” level, we understand this. We inherently distrust and fear anyone wearing a mask and the muffled shouts that come from that individual. This is buried deep in our genes, and in our culture. And it cannot be eliminated by declarations from politicians. Thus, seeing everyone around you in masks, creates anxiety and social isolation that can be profoundly harmful, and potentially create ever more violence.

This daily dehumanization, desensitization, alienation, and social isolation created by masks, can contribute to two different types of violence. Erich Fromm, tells us that “destructive aggression occurs … in conjunction with a momentary or chronic emotional withdrawal.”

First, is that “momentary emotional withdrawal” resulting in a spontaneous act of violence created by a specific circumstance.  Often resulting in a single homicide, committed in a fit of rage.

In addition to this spontaneous violence, there is the “chronic withdrawal” caused by a long-term build-up of alienation and isolation, that can result in mass murders and massacres. I hope I am wrong, but I believe in the coming year we will see many more horrific mass-murders and massacres.

Again, I pray that I am wrong. But I think it is very likely that we will see day-care massacres, school bus massacres, and vehicles used as weapons of mass murder, plowing into our children at100 miles-per-hour. These crimes have happened around the world, and it may be only a matter of time, until they come to our nation. (And there are many things we can and must do, right now, to mitigate the possible harm from such attacks.)

What else is left to shock us? What else is there, that will create media coverage, and provide the fame, that the alienated enraged killer desires?

We are on a heartbreaking, gut-wrenching descent into ever greater acts of evil. It started with school massacres committed by children, who grew up to give us college massacres, who then came back to our elementary schools as adults to express their rage in the mass murder of our children.

More information about this can be found in my book, Assassination Generation.  In the aftermath of the Parkland, Florida, school massacre, I was invited to the White House as part of the President’s round table on violent video games. I had the honor of giving a copy of Assassination Generation to the President. Last year I was invited to the White House again, and had the honor of briefing the Vice President and giving him a copy of my book.

Doctors tell us that masks contribute to acne, anxiety, depression and heart disease.  Dentists tell us that masks are causing gum disease and other dental problems.  I cannot speak to these medical pros-and-cons of masks. But I can state, without hesitation, that having our entire population wearing masks, is one of the most physically and psychologically harmful things we can do. There can be no doubt that it will lead our nation into even deeper depths of violence, death, despair, and heartache.

There is one other important dynamic that we must consider. A monstrous mass murder, by a single individual, can create more psychosocial trauma than countless deaths by disease. In its section on PTSD, the DSM (the “bible” of psychology and psychiatry) tells us that, whenever the cause of trauma is “human in nature” (such as assault, torture or rape) the degree of trauma is “more severe and long lasting.” Millions die from disease every day, and it has little impact on our behavior, but one serial killer or serial rapist can paralyze a city.

Thus, from one major and critical perspective, the over-all societal harm of fear, isolation, distrust, and violence created by masks, is far greater than the harm caused by disease. This downward spiral into alienation and distrust, is the opposite of “de-escalation” and “empathy”. These are buzz-words we hear a lot, but they do communicate powerful tools that are needed to reduce violence. Tools that are badly diminished by wearing a mask.

Finally, the field of killology can tell us something that the field of criminology refuses to confront. The number of murdered people completely under-represents the level of violence, because medical technology is saving ever more lives.

In 2002, Anthony Harris and a team of scholars from the University of Massachusetts and Harvard, published their landmark research, in the journal Homicide Studies. They concluded that advances in medical technology, between 1960 and 1999, cut the murder rate to a third, or a quarter, of what it would otherwise be. And the leaps and bounds of life-saving technology in the two decades since then — with lessons learned in almost 20 years of war — has saved the lives of even more victims of violence. Thus preventing many more murders.

When we compare money over any period of time, we speak in terms of “inflation-adjusted dollars.”  If we fail to do so, we intentionally and willfully misrepresent the amount of money involved.

When we look at murder over any period of time, we must talk in terms of “medically-adjusted murders.”  And we willfully and deliberately misrepresenting the situation, every time we fail to do so.

When we finally start reporting “medically-adjusted murders” then we will begin to understand just how desperately, tragically bad the situation has become. For every murder we report, there are ever increasing numbers of our citizens physically maimed and scarred, and emotionally crippled and traumatized by violence.

And how much more so, when we create vastly more “friction” by throwing that “handful of sand” into the engine-block of our civilization, by making everyone wear masks? This has already resulted in an erosion of emotional wellbeing, and an explosion of violent crime. And it is something that we can stop, right now, in order to save lives.

Masks truly can be murder.

Lt. Col. Dave Grossman (ret.) (www.killology.com) is an award winning author, and nationally recognized as a powerful, dynamic speaker and trainer. He has had over a dozen books published, to include his “perennial bestsellers” On Killing and On Combat, and a New York Times best-selling book co-authored with Glenn Beck. His books are “required” or “recommended” reading in all four branches of the US Armed Forces, and in federal and regional law enforcement academies nationwide.

He is a US Army Ranger, a paratrooper, a prior service sergeant, and a former West Point Psychology Professor. He has five patents to his name, has earned a Black Belt in Hojutsu (the martial art of the firearm), and has been inducted into the USA Martial Arts Hall of Fame.

His research was cited by the President of the United States in a national address, and he has testified before the U.S. Senate, the U.S. Congress, and numerous state legislatures. He has been invited to the White House on two occasions to brief the President and the Vice President. And he has written many peer-reviewed encyclopedia and journal entries in his area of expertise.

Since his retirement from the US Army in 1998, he has been on the road over 200 days a year, for over 22 years, as one of our nation’s leading trainers for military, law enforcement, mental health providers, and school safety organizations. He has been inducted as a “Life Diplomate” by the American Board for Certification in Homeland Security, and a “Life Member” of the American College of Forensic Examiners Institute.