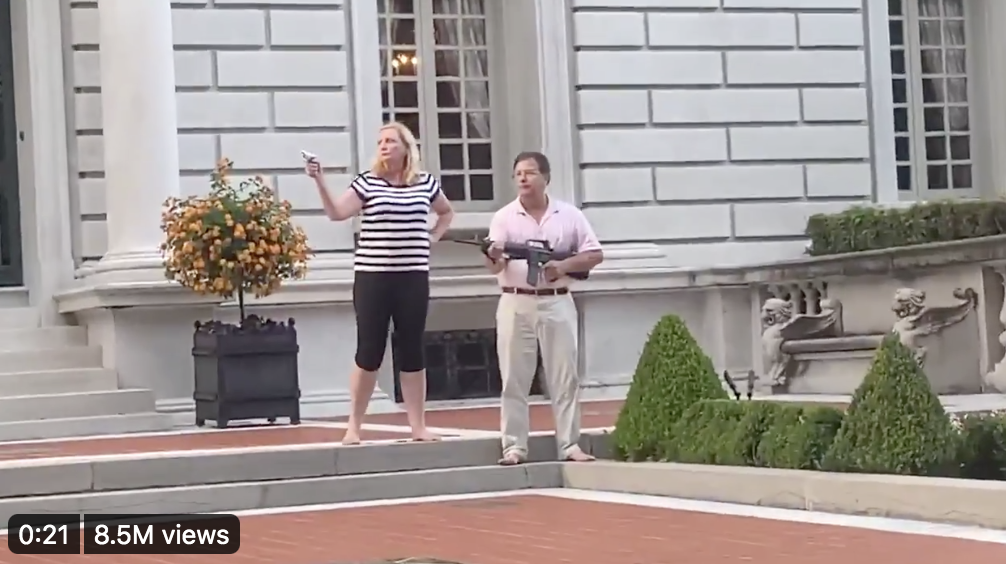 ST. LOUIS — Mark and Patricia McCloskey, the St. Louis couple that stood in front of their home over the summer holding firearms as a large group of demonstrators marched by, were indicted on Tuesday on felony weapons and evidence tampering charges.

“Lawyer Joel Schwartz said he was told a grand jury indicted his clients on felony counts of unlawful use of a weapon and evidence tampering,” the St. Louis Post-Dispatch reported. “He said he had no details. A St. Louis court clerk said the indictment was filed Tuesday but that she was not authorized to provide a copy.”

The charges related to an incident that occurred in June, when hundreds of Black Lives Matter protesters marched onto a private street the McCloskeys live on. The McCloskeys went outside to confront the protesters. Mark McCloskey had an AR-15 rifle, while Patricia McCloskey had a semiautomatic pistol.

The couple contends that protesters broke through an iron gate, ignored a “No Trespassing” sign, and screamed threats of arson and rape at them, while protest leaders say that the march was peaceful and no threats were made.

Watkins accused the prosecutors of tampering with the pistol by assembling it in a way that it could be fired.

“This is b——t,” Watkins told Fox News. “Hate to say it, but the state has a lot of problems with this one. And they transcend not just the evidence, but they actually are remarkably problematic from the standpoint of prosecutorial misconduct.”

Schwartz said, “I am not surprised that the grand jury indicted them but I’ll certainly be interested in what was presented to the grand jury.”

The couple was each charged by Democrat Circuit Attorney Kimberly Gardner in July with one felony count of brandishing a firearm.

“The government chooses to persecute us for doing no more than exercising our right to defend ourselves, our home, our property and our family and now we’re getting drug here time after time after time and for what?” Mark McCloskey said on Tuesday. “We didn’t fire a shot. People were violently protesting in front of our house and screaming death threats and threats of rape and threats of arson. Nobody gets charged but we get charged.”

The couple appeared in court earlier Tuesday, where a judge announced the case was continued to next Wednesday because the grand jury hadn’t reached a decision yet. After that hearing, Mark McCloskey said outside the courthouse that he and his wife are being “persecuted” and expressed frustration that none of the protesters involved in the incident have been charged.

“Every single human being that was in front of my house was a criminal trespasser. They broke down our gate. They trespassed on our property. Not a single one of those people is now charged with anything. We’re charged with felonies that could cost us four years of our lives and our law licenses,” he said.

The McCloskeys spoke at the Republican National Convention over the summer where they warned that what happened to them could happen to anyone, Daily Wire reported.

“America is such a great country that not only do you have the right to own a gun and use it to defend yourself, but thousands of Americans will offer you free advice on how to use it, at least that’s what we experienced,” Patricia McCloskey said. “What you saw happened to us could just as easily happen to any of you who are watching from quiet neighborhoods around our country. That’s what we want to speak to you about tonight.”

“Whether it’s the defunding of police, ending cash bails or criminals can be released back out on the streets the same day to riot again, or encouraging anarchy and chaos on our streets, it seems as if the Democrats no longer view the government’s job as protecting honest citizens from criminals, but rather protecting criminals from honest citizens,” Mark McCloskey said. “Not a single person in the out of control mob you saw at our house was charged with a crime, but you know who was? We were. They’ve actually charged us with felonies for daring to defend our home.”

“On top of that, consider this: The Marxist liberal activist leading the mob to our neighborhood stood outside our home with a bull horn screaming, ‘You can’t stop the revolution,’” Mark McCloskey continued. “Just weeks later, that same Marxist activist won the Democrat nomination to hold a seat in the US house of representatives in the city of St. Louis. That’s the same as winning the general election. That Marxist revolutionary is now going to be the congresswoman from the first district of Missouri. These radicals are not content with marching in the streets. They want to walk the halls of Congress. They want to take over. They want power. This is Joe Biden’s party. These are the people who will be in charge of your future and the future of your children.”

A judge set the next court date for Oct. 14th, but that is likely to change in light of the grand jury indictment.