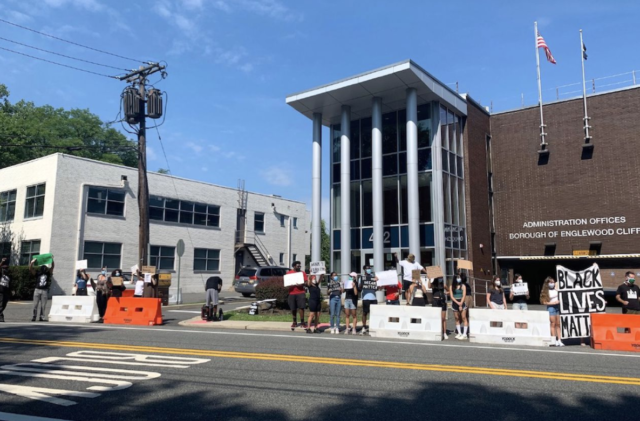 ENGLEWOOD CLIFFS, N.J. — A young New Jersey woman has been issued a $2,500 bill for police overtime costs after she set up a “small, peaceful Black Lives Matter protest” at the end of July, according to a report.

Gil believed that a shortage of affordable housing options in her neighborhood was a racial issue that should be brought to the public’s attention through a small protest, according to the news organization.

Nevertheless, four days after the demonstration, Gil received an invoice for police overtime that officials say was incurred due to the protest.

“Please promptly forward your payment to the borough in the amount of $2,499.26 for the police overtime caused by your protest,” Englewood Cliffs Mayor Mario M. Kranjac wrote in a letter.

The letter explained that Gil’s refusal to meet with officials left the Englewood Cliffs Police Department scrambling to provide security for the event, prompting overtime work for several officers.

“Your lack of notification left the borough with little time to prepare for your protest so that the police department and department of public works could ensure that everyone would be safe,” the mayor wrote, according to the news outlet.

Gil reportedly claimed she did not feel comfortable meeting with the officials in person due to the coronavirus, and asked if a Zoom meeting could be held instead. She said the request was denied.

“They kept pushing (an in-person meeting) and then they stopped responding to me,” Gil told NJ.com.

In response to the invoice she received, Gil said she complained to Englewood Cliffs police Chief William Henkelman, arguing the event did not require extra services by the police and that each demonstrator who attended discarded their own trash properly.

The chief responded by notifying Gil that he had informed the borough of the “extensive preparation required and the additional staffing that was needed, including overtime expenses,” the publication reported Friday.

Gil said the mayor had not responded to her email sent more than two weeks earlier, questioning the “legitimacy of the bill.”

“Ms. Gil is misinformed when she links our affordable housing issues with her protest, and she is wrong when she writes that I voted against affordable housing,” the mayor told the publication. “Everyone is welcome in Englewood Cliffs.”

The mayor’s office has yet to respond to NJ.com or FOX News request for comment regarding the invoice.

In a tweet Friday, the ACLU of New Jersey defended Gil, claiming the bill was an illegal charge for exercising free-speech rights that are protected by the U.S. Constitution.