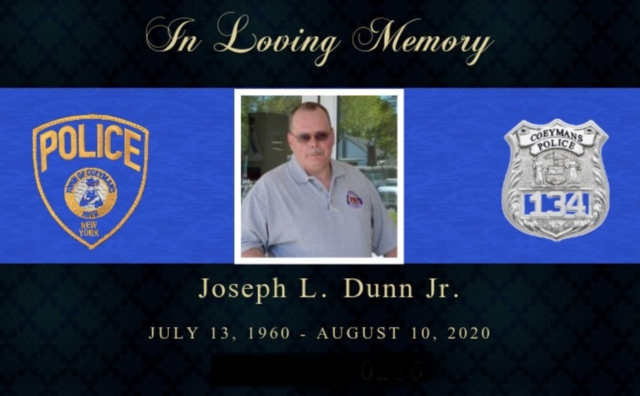 The resident was on the front lawn of the home when firefighters arrived, and the patient was taken to Albany Medical Center Hospital for burns, according to the Daily Gazette.

Dunn’s obituary said he was transferred to SUNY Upstate Medical University in Syracuse for treatment, where he “valiantly fought for his life, alongside an extraordinary medical team.” He died at the hospital on Monday.

“We remember Joe as one of the most thoughtful, kind and caring people you would ever meet,” the Coeymans police posted on its Facebook page. “No matter what the circumstances were, Joe was always there to lend a helping hand and would always offer support to those who needed it.”

Dunn, 60, a lifelong resident of Rotterdam, was a safety officer with the state Department of Corrections since 1984, working at the state Correctional Services Training Academy. He also served as a Coeymans police officer since 1995.

“He will always be remembered as a very humble man, favoring the simplest things in life: sipping Stewart’s coffee, closely following the news, weather, and politics, giving the most hilarious birthday greeting cards, and his love of policing,” his obituary said.