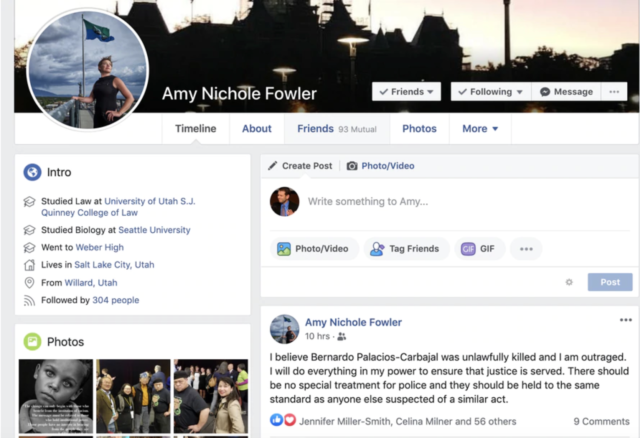 SALT LAKE CITY — The leader of Salt Lake City’s police union was so upset at criticism from City Councilmember Amy Fowler over an OIS that he filed an ethics complaint with the Utah State Bar.

The investigation is pending, reported The Salt Lake Tribune.

Fowler, an attorney, has been one of the most vocal public figures to criticize the shooting. In early June, she posted on her private Facebook page shortly after police released body camera footage. Although Fowler said she did not make the post public, news outlets reported on it, including The Salt Lake Tribune.

Early in the morning of May 23, police received two calls about armed robberies at a motel and found Bernardo Palacio-Carbajal rummaging through bags at the scene. Bodycam footage shows Palacios-Carbajal running away from officers after they confronted him. He kept stumbling and retrieving a gun he dropped when he fell. Officers Neil Iversen and Kevin Fortuna yelled “shows us your hands!” and “drop it!” several times, then fired more than 30 rounds when Palacios-Carbajal continued to flee.

“I believe Bernardo Palacios-Carbajal was unlawfully killed and I am outraged,” the post read. “I will do everything in my power to make sure justice is served. There should be no special treatment for police and they should be held to the same standard as anyone else suspected of a similar act.”

“Her actions have jeopardized and politicized an ongoing investigation and elicited death threats to at least one Salt Lake City police officer,” Winters wrote in the complaint.

He went on to call Fowler’s Facebook post and other public statements about Palacios-Carbajal’s death “reckless” and “unethical.” He also claimed she was using her public office to influence the investigation.

“She was not fair and impartial. She was making judgement calls on the situation without having all the facts,” Winters said in an interview.

Although the grievance said Fowler had removed her post, the councilmember told The Tribune it remains on her private page.

“I had watched the video on the news. I had spent a couple of days really upset and crying about it. I expressed my opinion and how I was feeling,” Fowler said. “Everything any public official says is going to get scrutinized in one way or another. It may not seem like it, but I was trying to be careful with my words and still express my feelings.”

She also said she stands by her statement and her right to say it.

“I don’t represent any of the parties involved. I didn’t have any outside or insider knowledge as an attorney or councilmember,” Fowler said. “I was simply expressing my feelings and I have a constitutional right to do that.”

A spokesperson with the Utah State Bar referred The Tribune to the Office of Professional Conduct, a separate entity which handles ethics complaints. The office declined to comment, with a spokesperson noting that “By rule, matters that this office investigates are confidential.”

Both Fowler and Winters said they have not received any updates since the grievance was filed in June.

Palacios-Carbajal’s death fueled multiple protests over the summer, culminating in a violent clash with police after Salt Lake County District Attorney Sim Gill concluded on July 9 that the shooting was legally justified.

The officers said they saw Palacios-Carbajal point his gun at them and they believed they were in danger.

“They put those two officers through living hell for months,” Winters said, adding that Iversen and Fortuna have yet to return to work. “We put them on trial in the media instead of letting the facts drive the [conversation].”

Winters added that police officers have long felt a lack of support from city administration and Police Chief Mike Brown. Mayor Erin Mendenhall and the City Council have made police reform a priority after numerous protests this summer and a deluge of public comments calling on elected officials to defund the police department.

“I understand the frustration on the mayor’s part, I totally do. She’s taking a lot of heat,” Winters said. “But on the same token, know all the facts … We don’t need police reform, we need justice reform. Quit trying to blame us for everything going on.”

The union president said it was unfair for the city to release the Palacios-Carbajal shooting footage without providing more context, including the victim’s criminal record.

“The video was horrible, it was frightening. But once you get all the content, it changes the situation,” Winters said. “He knew he wasn’t supposed to have a gun.”

The city formed a Commission on Racial Equity and Policing in June. On Aug. 3, Mendenhall announced new reforms for the police department with the police chief by her side. Days later, KUTV reported that the police union had cast a “preliminary” vote of no confidence against Brown.

Winters said that vote was leaked to the media and that the union did not intend for it to go public. But union members did want to get Brown’s attention, The Tribune reported.

The chief and union have had weekly meetings since, Winters added, but “we’re seeing a lot of talk and not a lot of action.”

Regarding his ethics complaint about Fowler, Winters said he didn’t necessarily want to see the councilmember lose her law license.

“I’m hoping it forces us to be a little more cautious about what we say about people,” he said, “that we don’t put a trial on with public opinion but with facts.”