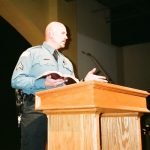 In these “radical,” dangerous times, God is looking for equally radical Christian warriors willing to stand firm and hold the line against the gates and powers of hell.

“…on this rock I will build my church, and the gates of hell shall not

Some you might be saying, “There’s MC using that word ‘radical’ again!” (yes, I’ve used this word in studies before — stay with me). Yet, perhaps in ways never before in modern history, we are living through genuinely “radical” times. Nor can I recall a time when the opposition against those of us who serve has been so demonicially fierce.

Accordingly, God is looking for truly radical Christian warriors (Christian officers and Christians in general) willing to stand firm and hold the line against the very gates of hell in this desperate hour.

As I’ve shared in previous teachings, the term “radical” is often misused, and misunderstood, especially as it relates to those who claim the title, “Christian.” Likewise, the same word is also often misapplied to those of us serving in our God-ordained profession of law enforcement. So what does this word actually mean, and how does it relate to our Christian faith and service?

Let’s start with some definitions. First, Webster (you know — the dictionary guy) defines “radical” as: “of or relating to the origin: fundamental” and “forming a basis or foundation.” Pretty basic!

Secondly, the Bible reveals that the word “radical” simply means “root.” In other words, it is biblically correct to state that “radical” Christianity is nothing less than Christianity 101.

Folks, the foundation and root of genuine, biblical Christianity is Jesus Christ and His radical COMMAND that Christians are to love one another: just as I have loved you …. By this all people will know that you are my disciples, if you have love for one another– John 13:34-35. Likewise, in the Gospel of Matthew, a Pharisee (a Jewish religious leader) tests Jesus with a question:  Teacher, which is the greatest commandment in the Law?” Jesus replies, ‘Love the Lord your God with all your heart and with all your soul and with all your mind.’ This is the first and greatest commandment. And the second is like it: ‘Love your neighbor as yourself.’ All the Law and the Prophets hang on these two commandments — Matthew 22:36-40. Jesus expands on this further in Luke 10:25-37 (the “Good Samaritan” passage). Rest assured, given that the “religious” Jews of Jesus’ day considered this Gentile “First Responder” to be lower than low (extreme prejudice), Jesus’ teaching was radical indeed!

With WWII and the Nazi menace all but upon his home nation of England, Howard Guinness wrote:

RADICAL! This then brings us to our main Bible passage for this study:

“And I tell you, you are Peter, and on this rock I will build my church, and the gates of hell shall not prevail against it.”

First, it is VITAL that we understand that Jesus was NOT telling Peter he was going to be the first “Pope” or any of that unbiblical mess. In brief, The name Peter (Greek — Petros) means “rock” or “rock-man.” In the next phrase Christ uses a different Greek word: petra (“upon this rock”), a feminine form for “rock,” not a name. Christ used as a play on words. He does not say “upon you, Peter” or “upon your successors,” but “upon this rock”— upon this divine revelation and profession of faith in Christ. For more on this, see the short article from our friends at Got

That said, this passage has powerful application for us in these radical, tenuous times, and our focus here is not on Peter but on “the gates of hell.” Pay close attention: One of the cardinal rules of biblical interpretation is to let the Bible interpret the Bible. So when we come to a phrase like “the gates of hell,” we need to stop ourselves from imagining what we think this means and do the hard work of finding out what it actually means.

The proper exegesis here is this: Jesus’ promise to Peter is not about storming the gates of hell or conquering demons. In fact, the repeated injunction in Ephesians 6 is “to stand.” Christ our Lord and “battle Captain” has already defeated the Devil (John 16:11). Our responsibility is to radically stand! To hold the line and resist the forces of hell behind our King and Captain. James tells us, “Submit yourselves, then, to God. Resist the devil, and he will flee from you” (James 4:7). Resisting the devil must be accompanied by submitting to God. A disobedient or unsubmissive believer or unbeliever will not see victory.

Moreover, God is NOT calling us to be “demon slayers.” We as Christians are to have nothing to do with the Devil and demons per se (albeit we who serve in law enforcement are in fact called to be a “terror against evil” — Romans 13:4 — meaning the lawless and wicked). Nor are we to “rebuke” the devil (a false teaching to be sure). Zechariah 3:2 tells us that it is the Lord alone who rebukes Satan. Even Michael, one of the most powerful of the angels, did not dare to accuse Satan, but rather said, “The Lord rebuke you” (Jude 1:9). In response to Satan’s attacks, Christians should redouble our efforts to clothe ourselves in spiritual armor, wield the Word (sword) of God, and rely on His power through prayer.

Clearly the “radical” promise in Matthew 16 is not about venturing out on some Dungeons and Dragons spiritual crusade but about Christ’s guarantee that the church — the body of Christian believers — will not be vanquished by death or demons.

Short of the Rapture, the concept of death (the end of this human existence) stalks each one of us, but those who confess Jesus as Lord and Savior (genuine Christians) know that death is not the end. We have the victory through Christ alone (1 Cor. 15:57). Jesus isn’t asking us to conquer anything, except perhaps our fear. Rather, He is calling His faithful to STAND firm in Him. To “hold the line.” To never retreat or yield.

So let’s radically preach and believe in Matthew 16:18 with all your might. But don’t misunderstand the promise. Jesus assures us of something better than world transformation or even the saving of our beloved Republic. He promises eternal life and wholesale victory over the enemy. Truly, with intense opposition and persecution, we are in fact under a fierce attack from the gates of hell. But just as Jesus conquered the grave, so the gates of hell — death itself — will not prevail against those who belong to Christ. As Jesus Himself put it, “Whoever believes in me, though he die, yet shall he live” (John 11:25).

In closing, let me say again that the power to live out this kind of radical faith is available ONLY to those who have been “born again” (a Christian as only God gets to define it) in Christ and thus have the Holy Spirit living inside them and empowering them (talk about radical). Do you have that? You can! Scroll down to the “Know God?” section below!

Reach out if you have questions! Love you guys and holding the line with you!

(1) Do you continue to hold to an utterly false hope that you can “earn” or otherwise “badge” your way into heaven and escape hell because you consider yourself to be a “good” cop or a “good person” (the “I’m good” mess)? That you can be “good” enough without knowing Christ as Lord and Savior? That mere “belief” is enough to “save” you? That you somehow “deserve” heaven because of your so-called “good” service in law enforcement? Take  the  Good Person Test  and see how you do!

(2) Jesus’ first recorded words in His earthly adult ministry included, “Repent and believe in the Good News…” — Mark 1:15. To repent is a “180” — a complete, radical change of mind and heart as it relates to our sin (as God defines it). To “believe”  (pisteuo in the original Greek) as Jesus intends it here is to wholeheartedly trust and surrender your life to Christ in faith in the same way we have “faith” that our body armor will do its job against the rounds it is intended to stop; that a well-maintained weapon will function properly when used in against criminals intent on destroying us or others; or that our parachute will open when it is supposed to on a combat jump (we stake our very lives on it)! For more, see What does it mean to believe in Jesus?

(3) This same concept of “believe” (the saving kind) is further revealed in John 3:1-21  where Jesus says, “… you must be born again.” Again, note our Lord’s emphasis on the word “must” (not “may” or “should” or even “someday”): this is ultimately the life-saving AND life-changing  personal relationship (and NOT “religion”) with Jesus Christ that I stress here every week (see What does it mean to be a born again Christian?). HINT: there is no other kind.

(5) Need more? Then check out this powerful, short video message that also comes to us from Travis Yates:  Cops and Salvation

(6) Have you now said “yes” to Jesus as Lord and Savior but are wondering what to do next? The “now what” is also an important part in dealing with the issues that can lead to suicide and sin in general. Click on, Now what?

Michael “MC” Williams is an active police officer, state criminal investigator, chaplain/minister and police instructor with more than three decades on “the job.” As a contributor to Law Officer’s Chaplain’s Corner, he provides a biblical, front sight focus on the daily issues we face in law enforcement. MC is a sought-after speaker who serves as the Director of the Centurion Law Enforcement Ministry and is a past National Board Vice President of the Fellowship of Christian Peace Officers – USA. MC can be reached at thecenturionministry@gmail.com.