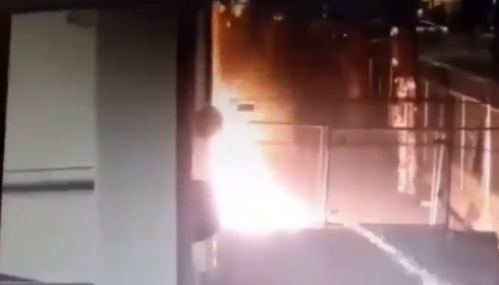 SEATTLE — Police began monitoring a protest that marched from Cal Anderson Park just after 9 p.m. Monday. The group made their way to the West Precinct where some individuals began hurling objects at the building causing minor damage and broken windows as well as painting graffiti on the walls. A nearby coffee shop also sustained some damage as some people smashed the plate glass windows, breaking911.com reported.

The group then made their way back east and continued to protest outside the East Precinct. Rioters climbed over a chain-link fence and set a fire next to the building, according to mynorthwest.com.

According to radio host Jason Rantz, the demonstrators then “used a substance suspected to be quick-dry concrete to seal shut [a] door.” Rantz claims to have seen photos of the concrete and tools used.

Police moved in and began issuing commands for the crowd to disperse and took one person into custody for investigation of arson. The Bureau of Alcohol, Tobacco, Firearms and Explosives (ATF) is now assisting in the investigation.

The group returned to Cal Anderson Park around midnight and dispersed from there.

A source told Rantz that officers inside had to kick the door open to exit the building and disperse the rioters. Luckily, already lacking discernible skills, the rioters did not follow directions and may have used too much water in the cement mixture. Photos indicate it was too runny to fully seal the doorway shut.

One officer was injured during the course of the protests, breaking911.com reported.

Here’s new video purportedly showing criminals trying to set fire to Seattle’s East Precinct last night, after trying to cement the door to the building closed, knowing cops were inside.

Detectives are also investigating an arson at an office building in the 2900 block of 4th Avenue South after someone threw multiple incendiary devices, causing some damage. It is unclear this incident is tied to the protests.

Seattle Police Officers Guild president Mike Solan is condemning the crime, along with the lack of response from city leaders.

“It’s clear that domestic terrorists are continuing to hold our great city hostage by their criminal acts,” Solan tells the Jason Rantz Show on KTTH. “We’re talking about a little over 100 people who continue to force their political agenda to push assaults on officers, destroy private and public property, to continue their dangerous ideology. What’s next has been seen before and I’m fearful that someone will lose their life in the coming days. This could all stop if our public officials would decry and push back against these criminal acts.”