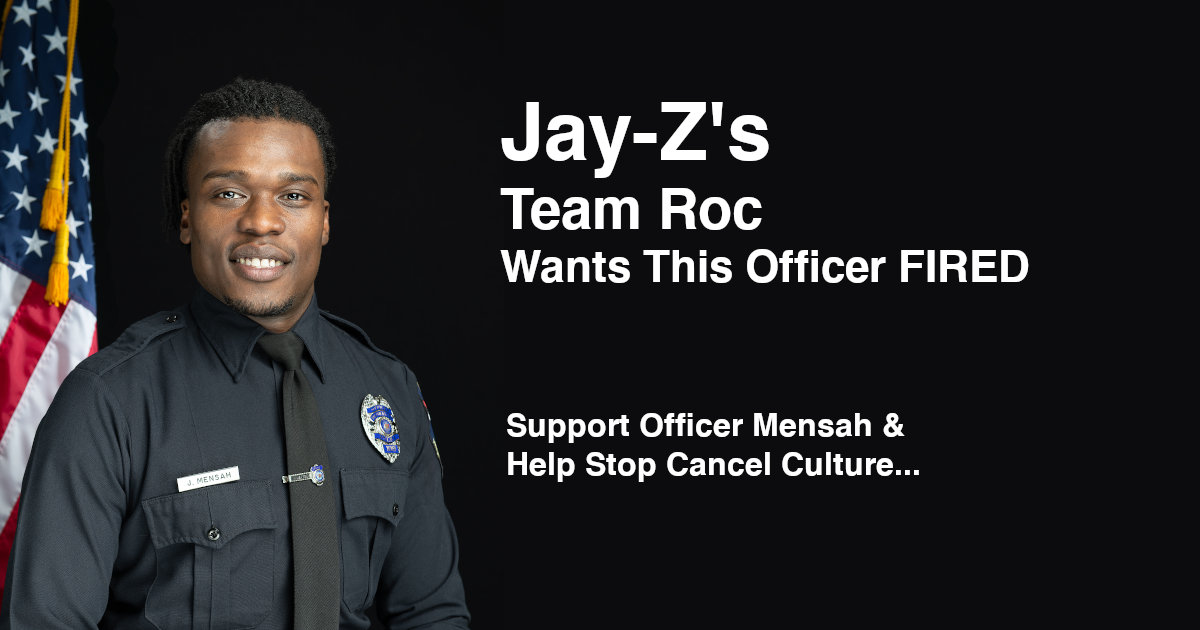 For the last few weeks, Law Officer has brought you the story of Wauwatosa (WI) Officer Joseph Mensah. It is likely the most egregious action taken against a police officer we have ever seen.

Mensah, an decorated African American Officer has shot and killed three men during his career. Each of them were attacking him with weapons and each one has been investigated and justified.

The facts are clear and to any sane individual, there is not a question about the actions taken.

But we are far beyond sanity in this country and politicians, activists and even celebrities are calling for Mensah’s firing and prosecution.

THE JONAS BROTHERS DEMAND THE PROSECUTION OF OFFICER MENSAH

The city council has even suspended him and they are “re-investigating” each shooting.

You can read the crazy details here and Joseph’s support has been tremendous with just about everyone.

And with that said, the local media has failed to properly tell the facts of this case.

We have watched from afar and we are proud of the great citizens of Wauwatosa that have supported Joseph both in encouragement and financially and we are extremely proud of the work that the Wauwatosa Peace Officers Association has done to support him.

Not every officer being attacked for no other reason than for doing his job and in this case, protecting his life, has that luxury.

AN OPEN LETTER TO THE JONAS BROTHERS AND TEAM ROC

the importance of that support is tremendous considering that the leadership within the organization are full time cops, working for the same politicians that have done this to Joseph and their role in the association is part time.

We are especially grateful to President John Milotzky, a 27 year veteran, who likely has a lot to lose by standing up for what is right.

But that’s the thing with leadership. True leaders do the right thing, regardless of the consequences so on behalf of Law Officer, we thank John and his leadership team for doing the right thing because from what we have seen, very few so called leaders in that city are.

Below is the press release that President John Milotzky issued today. We don’t typically run press releases from a local community because we would expect the media in that area to do their job. In the case of the Milwaukee media, their only role in the Officer Joseph Mensah case is to stoke emotions along with their half truths.

They have yet to publish or report on the press releases that detail the accurate events in this incident.

You can read the press release below and download it here but before you do, sign this petition and send some of these cowards an e-mail, telling them what you think.

If you are unsure of the details, check out this website that tells the truth about Officer Joseph Mensah.

On July 30, 2020, the WPOA released a statement addressing concern over the actions of Mayor McBride and Alderperson Kuhl to exert influence and pressure on the Police and Fire Commission (PFC). Specifically, Alderperson Kuhl sent an e-mail to the Commission which, instead of focusing on facts, asserted that so long as Officer Mensah represents the police department “we cannot purport to have any serious conversations about repairing the damage of our past.”

The WPOA is not sure how the historic “damage” of the City’s past relates to the facts of Officer Mensah’s job performance, or what Alderperson Kuhl claimed in her email to the PFC to be an urgent need to terminate Officer Mensah.

We also ask Mayor McBride to clarify how Alderperson Kuhl’s email: 1) did not taint the due process to which Officer Mensah is entitled, given that it was presented to the PFC and contained within the documents provided to the PFC, and 2) did not unethically influence perceptions of Officer Mensah’s reputation and character beyond the facts of the matter.

Lastly, Mayor McBride has misinformed the public by incorrectly telling the Journal Sentinel that “experts we have consulted tell us that Officer Mensah is unique, in that no other officer in America has shot and killed three people while on duty, and in such a short time span (five years).” The Mayor has made that same inaccurate statement in email replies to community members.

Had Mayor McBride engaged us directly in conversation early on, we could have corrected this false “expert” claim. For example, we could have pointed out how a Brown County (FL) Sheriff’s Deputy was unfortunately involved in three fatal shootings from 2009-2011, and a fourth fatal shooting in 2015. 1

As that deputy had to defend himself against violence that led to three fatal shootings within a three year period, Officer Mensah cannot possibly be classified as “unique” as Mayor McBride falsely claimed.

We also could have cited other examples as well to help prevent Mayor McBride from further misinforming and misleading the public.

We hope that Mayor McBride and Alderperson Kuhl will provide clarification and further explanation on these matters, so that their positions can be better understood, and the public can be better informed.

You can contact the city officials here. They have suspended a decorated black officer that has no disciplinary issues and without any violations of department policy.

Alderperson Kuhl was the first to demand the firing of Officer Mensah. In an e-mail she requested to be made public, Kuhl stated that “Last year, Wauwatosa acknowledged our racist history…” but “as long as Joseph Mensah is representing the city of Wauwatosa and our Police Department, we cannot purport to have any serious conversations about repairing the damage of our past and committing to building a community that is inclusive for all.”

Please ask Alderperson Kuhl to clarify how firing a black officer for defending himself helps to “repair the damage” of Wauwatosa’s “racist history”?