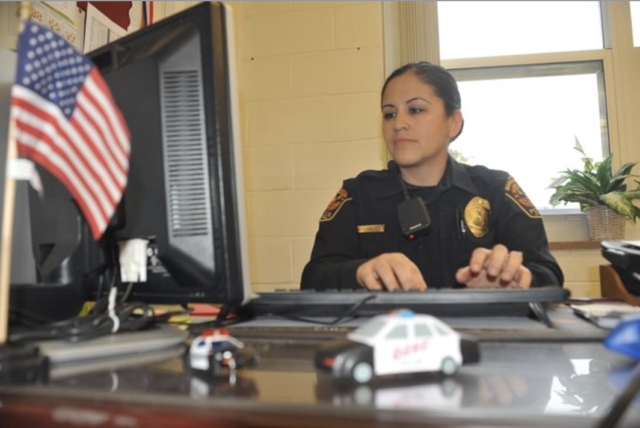 A woman was raped during a daytime home invasion. The standard protocol was followed: police report, In Vitro kit, follow-up by detectives. The following day this information was disseminated at roll call in the district. On the second day one of the school teams had a lead. The third day a student was brought into the detective division where a lineup was held. Without hesitation the victim picked the student as the individual who raped her. He was charged with burglary and rape.

One very cold winter day, the school team was patrolling the grounds before school started. They observed a gang member/student drive a nice automobile into the student parking lot. Curiosity got the better of them and the license plate was run. It came back hot. Further investigation revealed that the car belonged to a teacher at the very same school. After being arrested for possession of a stolen auto, the student blurted out that it was too cold to take the bus so he stole the teacher’s automobile days earlier.

A drive-by shooting took place before school where, luckily nobody was injured. A car drove past the school and sprayed the front stairs with numerous 9mm rounds. An investigation was initiated and reports made. The following day the school officers had an arrest of a student involved in a gang altercation. He was identified as the shooter from the previous day. Within 24 hours a shooting incident was cleared and the offender eventually wound up doing 6 years in the penitentiary.

Six Corners is a popular shopping district on Chicago’s Northside. For weeks on end, store windows were being damaged by somebody etching their nickname into the glass with some type of glass cutter. This damage to property is a low priority crime, but to those stores that are forced to replace a window every week, it becomes a very expensive issue. Lucky for those stores, one officer working the local high school was intrigued by graffiti and kept a file on unusual nicknames. With a little downtime between classes, the officer was reviewing graffiti related police reports and eventually attached a name to the etched windows. The student was arrested at his home by our tact team and charged with numerous counts of felony criminal damage to property.

Curious school officers were perusing the police reports from the previous day. The officers noticed a pattern of burglaries committed during the same timeframe throughout the day. They reviewed the schools class periods and found the burglaries were occurring during a single lunch period. With a little more investigation and reviewing the report’s description of the burglar, the officers had a suspect. The school security was summoned and the student’s locker was opened. At the direction of the police officers standing over his shoulder, the security officer took requested items from the locker and placed them on the floor where the officers identified them as proceeds from the burglaries. A warrant was not needed because the locker is school property and the school security is allowed access to all lockers. The student was arrested and charged with numerous daytime burglaries.

Now for my favorite recollection.

A gang shooting had taken place after school and two individuals were injured and hospitalized in critical condition. The school officers, through their network of informants were able to identify the shooter, a gang enforcer. The word was out that he was not going to be taken alive.

For days in a row the school officers checked attendance records and eventually notified me that this individual was in school that day. I quickly formed a team in the parking lot and into the school we went. The school officers informed us of the class room and the times he would be there. As we made our way to the room we were met by the Dean of Discipline. He was a man who openly detested the police and was very eager to display it. He stood blocking our way and demanded to know why this small army of police had invaded his school. I explained that we were there to arrest one of his students for a violent gang related shooting. He stepped within a foot of my face and informed me that no way was I going to arrest a student of his during school hours. He demanded we leave immediately and return after hours.

I stepped forward to within inches of this man’s face and explained that we were going to make this arrest. If he continued to interfere with a lawful apprehension, I would personally arrest him and handcuff him. I would then wait until the bell rang signaling the change of classes, then I would drag him out of school in front of all the students and throw him into my squad car. He stepped aside.

Officers armed with a picture of the wanted student quickly entered the front and rear doors of the classroom and within seconds the shooter was in cuffs. A quick explanation and apology to the teacher and we were on our way to the detective area with the prisoner.

As part of my duties, I was responsible for the welfare of two colleges, four high schools and 22 elementary schools in my district. I am fully aware of the positive impact police officers make in schools, particularly high schools.

Police officers in uniform present a level of stability to the average students. They are the neutral wall between rival gang members strolling the school halls. They are guidance counselors and advisers to many students confused by maturity. They are a great source of information and often have the pulse of the neighborhood. These officers are more than police. At times, they are the lifeline of many students who are on the edge.

Remove the police officers from your schools at your own peril, or more precisely, at the student’s peril.

To all my brothers and sisters in blue, lock and load and protect one another. And as always, stay safe.

View Larry Casey’s website at www.StoriesofaChicagoPoliceOfficer.com and review his book by the same name.

Having had a grandfather and father on the Chicago Police Department made the choice of becoming a police officer relatively simple. Between the excitement of having a real profession and the prospect of following in the Casey footprint, the Chicago Police Department seemed a natural choice. I retired at the age of fifty-six after thirty years of a very wide variety of police work and assignments. After a few months of relaxation, I started my next career as an adjunct professor of Criminal Justice at Wilbur Wright College. I taught there for ten years and recently retired again.

Trading thoughts about my police experience led me to write a book of my memories. I did not want to bore people with the typical police stories of shooting-em-ups. And seeing I was always a proponent of humor being a policeman’s best outlet for stress, I decided it was appropriate of me, to write a very different genre of police book. My compilation of short stories is based on the humorous side of police work. Honesty, it is also a base for many memories, stories that were too raw or considered too embarrassing for the everyday reader.

I’m very proud to say, I teamed up with the Chicago Police Memorial Foundation and I send them a donation for every book I sell through Pay-Pal or at book signings. I have done book signings for charitable events, for police vests, local libraries, GOP sponsored events, local community events and many others.

My main goal in writing was to entertain and educate the public: to show that police officers are fathers, mother, sisters and brothers, etc. We’re real people with hearts and souls. We laugh and cry like everybody else. We change tires and diapers, go to ball games and wash our cars. We’re simply human.