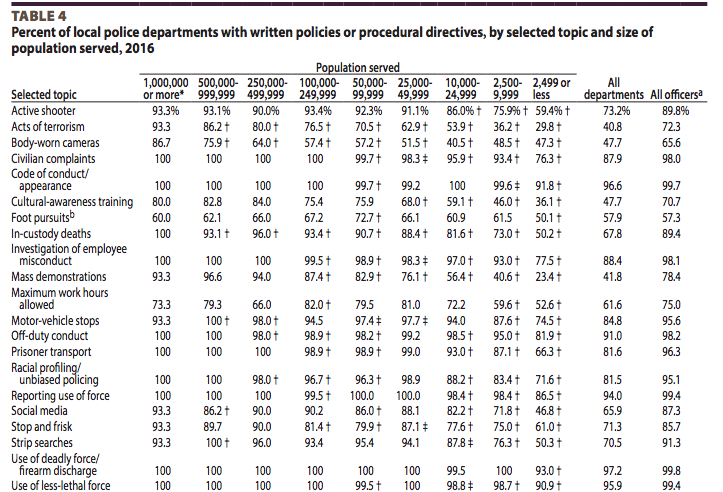 There is a new document from The Bureau of Justice Statistics of the US Department of Justice documenting the use of force, training hours, costs per officer, and related policies of “local” police departments, BJS.

There is a separate report on sheriff’s department policies, BJS.

The focus of this article is on local police agencies. The surveys were conducted in 2016.

The data needs to be read carefully; there will be considerable differences between smaller and larger agencies. Readers may want to go to the charts offered (including footnotes) and look carefully at the variables.  For example, the average police recruit receives approximately 1,000 hours of training but this increases to approximately 1,800 for larger agencies.

The differences between smaller and larger agencies continue throughout the document. There will also be considerable differences in measurements between officers and agencies.

Please note that I use rounded percentages. I added some charts below because of the complexity of the issue addressed.

No finding from the Bureau of Justice Statistics is absolute because of the complexity of a national survey. There are 18,000 police agencies with thousands of individuals interpreting questions and the most appropriate responses.

Training: The average police agency provides 1,000 hours of training. Training ranges from 700 to 1,800 hours depending on population. Cities of over 1,000,000 people had the highest number of training hours.

Community Policing Plan: 42 percent of police departments have a written community policing plan, ranging from 36 percent to 80 percent. Cities of over 1,000,000 people had the highest percentage.

In-Service Training: The average annual number for in-service training is 39, ranging from 31 to 43.

Written Policies: The vast majority of police departments have written policies as to key topics (i.e., racial profiling, stop and frisk, off duty conduct). The lowest categories include body-worn cameras (48 percent), mass demonstrations (42 percent), acts of terrorism (41 percent), and cultural awareness training, 48 percent. Larger cities had considerably higher percentages. I suggest you focus on the percentage of officers rather than the percentage of agencies. See the chart below:

Firearm Discharge: 83 percent of all departments require written documentation if a firearm is discharged. 54 percent require documentation is displayed.

Less Than Lethal Weapons: The vast majority of police agencies authorize less than lethal weapons. The exception is the use of explosives which is authorized by 10 percent of all departments but is used by 73 percent of agencies serving a population of 1,000,000 or more. It’s similar for blunt force projectiles (i.e., bean bags-rubber bullets) and chemical agent projectiles being authorized by less than half of agencies but used by the majority of larger agencies. The differences between the percentage of officers and the percentage of agencies are considerable. See the chart below:

Civilian Complaint Review Board:  11 percent percent of all departments have a civilian complaint review board. The percentage increases to 51 percent for cities of 250,000 or more.

The Crime in America.Net RSS feed (https://crimeinamerica.net/?feed=rss2) provides subscribers with a means to stay informed about the latest news, publications, and other announcements from the site.

My book based on thirty-five years of criminal justice public relations,” Success With The Media: Everything You Need To Survive Reporters and Your Organization” available at Amazon