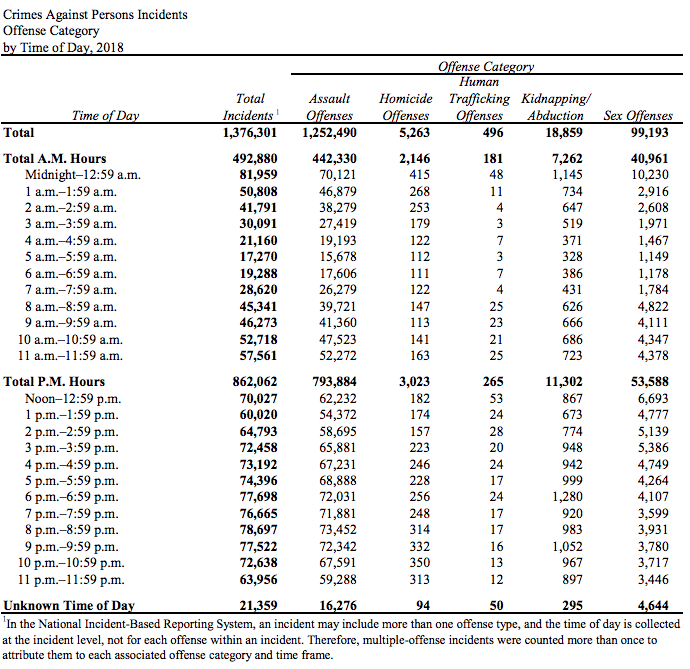 We analyze the time of day and months when violent crime occurs. Months for property crime is included.

You can summarize by suggesting that the midnight-1:00 a.m. time slot during warmer months is the most dangerous for reported violent crime, but there is no safe time or month when it comes to lowering your chances for violent victimization. It’s a matter of degree of risk.

It’s somewhat similar for monthly differences. January-February has the lowest violent numbers and May-August has the highest.

But the numerical differences for 330 million Americans based on 18,000 reporting law enforcement agencies indicate that there is no safe month or time for crime. Again, it’s a matter of degree.

Readers ask for the most dangerous months and times for violent crime with the presumption that knowing this allows them to take extra precautions or judge their degree of risk.

Every summer, there are media reports of law enforcement agencies gearing up for the “dangerous” summer months.

There are charts from the FBI and their National Incident-Based Reporting System (NIBRS-below) that are insightful. One focuses on times violence happens. It’s supplemented by a previous article as to the month’s violent crime occurs. I asked the FBI to update this data.

This is the fifth and final article in a series using FBI-NIBRS data including, Most Violent Crime Does Not Involve Firearms, Most Crimes Do Not Involve Arrest, The Probability Of Violent Victimization, and Where Violent Crime Happens.

As a young police officer, I was told that there were two types of people out after midnight, cops and those under the influence of drugs and alcohol. Per the chart below, the largest number of violent crimes happen from midnight to 1:00 a.m.

Homicides, assaults, and sex offenses have higher numbers during this time period.

But beyond that time slot, early to mid-morning acts of violence shrink considerably but rise again beginning at 8:00 a.m.

Generally speaking, beyond Noon, the time slots correlated with violent crime seems to be fairly evenly spaced. It’s interesting that the 11:00 p.m. to midnight slot is the second-lowest for evenings considering what we discussed above regarding the largest number of violent crimes happening from midnight to 1:00 a.m.

The numerical difference for most time slots may not be a profound issue when spread over 330 million US citizens and 18,000 law enforcement agencies.

There is endless debate as to which months are more prevalent for violent and property crime.

December seems to dominate all other months for violent and property crime, which doesn’t make sense. Crime is usually a warm-weather proposition.

December has always been a high month for robberies, but it’s the warm weather months that lead for violent crime.

It turns out that the data is flawed by police agencies submitting their numbers at the end of the calendar year, which inflates December data.

From the FBI: “Our Crime Statistics Management Unit advised that sometimes when a state/agency sends data once a year, the figures fall in December, inflating the December totals.”

Thus we discard December data and look to the other months for guidance.

May through August have the highest violent crime numbers.

January-February has the lowest numbers.

But most months fall into the 80,000-100,000 range. Yes, there are variations between warm and cold weather months, but most months share more commonality than differences.

I understand that warm weather months bring increasing crime concerns, but the numerical difference between most months and the 100,000+ for the summer months may not be a profound issue when spread over 330 million people and 18,000 law enforcement agencies in the U.S.

The lesson seems to be that we have more consistency than variations, thus every month is a concern for violent crime.

The concern as to law enforcement agencies reporting all crimes in December (thus inflating December data) continues to apply to property crimes.

We will not use December data for our analysis.

May through October are the highest months for property crime.

January through March are the lowest months.

Thus, like violent crime, property crime remains a concern throughout the year and spread between 330 million people, the differences are not profound.

You can summarize the above by suggesting that the midnight-1:00 a.m. time slot during warmer months are the most dangerous for reported violent crime.

“But,” and it’s a big “but,” violence occurs throughout the day and year with some degree of constancy.  Yes, cold weather months and the early morning time slots seem “safer,” but, quite simply, there is not a time or month where you are safe from violent crime. It’s a matter of degree.

Implemented to improve the overall quality of crime data collected by law enforcement, NIBRS captures details on each single crime incident, as well as on separate offenses within the same incident, including information on victims, known offenders, relationships between victims and offenders, arrestees, and property involved in crimes. Unlike data reported through the UCR Program’s traditional Summary Reporting System, an aggregate monthly tally of crimes, NIBRS goes much deeper because of its ability to provide circumstances and context for crimes like location, time of day, and whether the incident was cleared.

As recommended by professional law enforcement organizations, the FBI has made the nationwide implementation of NIBRS a top priority because NIBRS can provide more useful statistics to promote constructive discussion, measured planning, and informed policing.

The vision for NIBRS is for it to become the law enforcement community’s standard for quantifying crime, which will help law enforcement and communities around the country use resources more strategically and effectively. In 2018, approximately 44 percent of U.S. law enforcement agencies that participated in the UCR Program submitted data via NIBRS.

When used to its full potential, NIBRS identifies, with precision, when and where crime takes place, what form it takes, and the characteristics of its victims and perpetrators. Armed with such information, law enforcement can better define the resources it needs to fight crime, as well as use those resources in the most efficient and effective manner.

More information about the NIBRS transition is available on the NIBRS webpage at FBI.

The Crime in America.Net RSS feed (https://crimeinamerica.net/?feed=rss2) provides subscribers with a means to stay informed about the latest news, publications and other announcements from the site.

My book based on thirty-five years of criminal justice public relations,” Success With The Media: Everything You Need To Survive Reporters and Your Organization” available at Amazon